Well, westerns and time travel. The advantage of a time travel is that you can go anywhere you want and I do love the ones that take me back to my westerns. I was a little apprehensive when it came time to write my own, but I couldn't resist.

The idea of mail order brides intrigued me and I have a thing about law men...probably comes from dating a former Marine who became a U.S. Marshal.  Hmmm, ya think? But the idea intrigued me long before my own hottie came into my life.

A couple of years ago my thoughts wove around the idea of a mail order bride hiding from heinous crime and, since I love reading and writing romance, meeting the love of her life. That became Indentured Bride. Along the way of writing Brett and Jenna's story I "met" Brett's brothers and his best friend. Well it only made sense that Brett's brother, a Marshal, would be the one to bring the evidence to save his bride from the hangman's noose.

This week Mistaken Bride debuted at Awe-struck (http://www.awe-struck.net/)! Kendrick Parker, Brett's older brother begins his trek west with the evidence to clear Jenna. Along the way though, he encounters a woman he is sure is the devilish, perfectly evil Black Bette. Taking the woman who calls herself Amanda into custody he drags her along the trail. But as the wagon train makes way west, he begins to question the rightness of his decision. 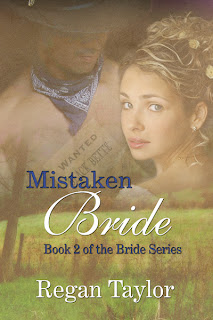 Following that too potent kiss, even days later, each night Amanda, as she made up their bed, tried a different arrangement to keep Kendrick at a safe distance. She told herself she was relieved he rode out early each morning and kept away from the train during the day. He took his supper with the men and kept his distance while she taught the children each night. Oh she’d feel his gaze on her each night. But he never approached. When it was time to turn in he’d enter the wagon after she was snuggled under the blankets.


As usual, tonight, she told herself it was because he was a disreputable rogue that he had kidnapped her against her will and stolen her livelihood from her, not because she was starting to want more than those kisses, kisses she was finding herself missing. “Poor excuse for a gentleman,” she muttered under her breath. “I can’t wait to see his face when he finds out what a mistake he has made. Of course, brute that he is he probably won’t even apologize let alone make reparations.”

“You say something, Mandy?” he asked as he climbed up in the wagon and took in her latest design to keep her distance from him. He startled her because he entered before she had turned in.

“No. Until you listen to what I have to say about who I really am, I have nothing to say to you.”

“Fine. So, that line of pots gonna keep you warm when the chill sets in tonight?”

“What do you care if I’m warm or not?” She turned and in the soft glow saw he had shaved the beard that had been growing over the past few days. Whether it was for his own comfort or the fact that this morning, when she woke, chest to chest with him, she grumbled when his beard abraded her cheek she didn't know. And, she reminded herself, she didn't care. She was strong enough to admit to herself that the real reason she groused at the beard wasn’t so much because it scratched her. No, the problem was it felt good. Too good. His beard was soft and made her wonder what it would feel like to run her fingers through his hair and know she was doing it. Not the unconscious entwining she engaged in when he kissed her. She wanted the freedom to do it the way he often threaded his own fingers through it. The blond locks crested his collar—shorter than many men of her acquaintance wore. He also eschewed the thick sideburns most eastern men sported. Kendrick Parker was definitely his own man. A very potent man from what she’d observed as he rode, gathered wood for the fires and strode about the camp. Taller and broader than most, he was a force to be reckoned with.

And stubborn as a mule.

No. He was more stubborn than a mule. You could pull a mule or kick it in the posterior and it’d get moving. Kendrick Parker just dug in and stayed there till he was good and ready to move.

“I care. Don’t want you getting sick and holding things up or making anyone else ill.”

“You’re too kind. I’ll be just fine without you accosting me in my sleep.”

“I don’t,” he paused for emphasis, “accost you in your sleep.”

“You most certainly do.”

“Lady, I can’t stand what little touching I have to do for appearances. I’m not about to touch you when I don’t have to.”

“That’s why you constantly paw at me in public before you force your kisses on me.”

“I don’t paw at you. And if I do touch you, it’s purely for appearances.”

“Well good. Which side of the pots do you want?” She huffed, hands on her hips, her stance defiant. For all the good it did. The man still made her feel weak-kneed.

Lord help her if he ever realized how she would watch for him during the day, drinking in the sight of him mounted on his horse. Sometimes she imagined herself sitting between his thighs on the big stallion. He was always there to help out the other men on the trail setting up camp or bringing buckets of water for the women. When it came to the children, especially when one of the younger ones would get cranky after a long day on the trail, he always spoke to them with fondness in his tone. A few days out of St. Louis he had begun to allow one of the children to ride a bit with him while he rode scout. When it came to Amanda, at least outwardly he treated her as a gentleman would. It was becoming increasingly necessary for her to remind herself what a troublesome man he was.
Posted by Missy at 4:23 PM

Email ThisBlogThis!Share to TwitterShare to FacebookShare to Pinterest
Labels: Awe-struck, Mistaken Bride, Regan Taylor, Western Romance
Missy
I am Miss Missy, Empress of the Universe, Daughter of Satan, but you can call me Your Majesty.

Your books sound intriguing, and there is indeed something about a western. I'm working on one myself.
Good luck with the new release.