I was fascinated by Mary Robinson, or ‘Perdita’, as she’s more commonly known. She was a complex character with flaws of vanity and pride, a predilection for spending but hugely ambitious, and a woman of great courage. Despite these weaknesses I couldn’t help but admire her. She married at just fourteen to Thomas Robinson, under family pressure as was often the case at a time when love was not considered essential in a marriage. The alliance resulted in the young couple spending time in The Fleet for debt, leaving Mary with a determination to seek her own financial security.

The Georgian period has always been a favourite of mine as it resonates so well with our own in many ways. It had style and elegance, but was very much an age of extremes, one almost as celebrity driven and equally beset by debt, if largely due to the national passion for gambling. Mary became close friends with Georgiana, the Duchess of Devonshire, the doyenne of fashion and gambling. Mary too became a fashion icon and renowned beauty, her portrait painted by Thomas Gainsborough, Sir Joshua Reynolds, George Romney and John Hoppner.

She enjoyed a brief affair with the future George IV when he was just seventeen, and rather naively expected him to stay true. With her reputation ruined and her career lost, she fought a long political battle for recompense, assisted by Charles James Fox. Unlike many courtesans, she was intelligent, a talented actress and gifted poet who did later achieve the promised potential of her youth, despite many disappointments in life and suffering from a crippling disease from a very young age.

It is impossible to accurately diagnose the exact nature of the illness which struck her down one fateful night. Very likely it was an acute form of rheumatic fever that possibly affected the nerves, perhaps caused by an infection during her miscarriage. Quite common at that time. Mary became an early feminist, a writer of Gothic romance in addition to her poetry, largely forgotten today, and despite the considerable pain she suffered, continued writing to her death, becoming known as the English Sappho.

Mary Robinson died practically penniless in 1800, aged 42, of dropsy, a retention of fluid on the chest which causes heart failure, often linked with rheumatic fever. She asked for a lock of her hair to be sent to the Prince, and one to Tarleton, hero of the American War of Independence and the love of her life. She was buried in a corner of the churchyard at Old Windsor, apparently still wearing the Prince’s miniature. Lady of Passion is entirely based on fact, much of it from her own Memoir, backed up by less emotional biographies. 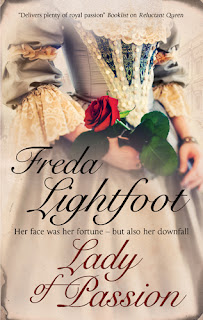 A beautiful and talented actress, poet and fashion icon, Mary Robinson was one of the most famous women of her time. But Mary was destined always to be betrayed by the men she loved: by her father, a prosperous Bristol merchant who abandoned his family for a life of adventure – and another woman; by her husband, a weak and foolish man who bankrupted the family with his inveterate gambling and humiliated his young wife with his numerous affairs; and by the Prince of Wales, later King George IV, who fell in love with Mary when he saw her playing Perdita in A Winter’s Tale. Mary gave up everything for her prince – her career, her husband and her independence – only to be cruelly abandoned when his affections turned elsewhere. And then she met the love of her life. Could she hope this time it would be different?

Against the turbulent background of the American War of Independence and the French Revolution, this is the enthralling story of a remarkable woman: a tale of ambition, passion, scandal and heartbreak.