Bread and Butter Pudding
Several slices of thin bread with margarine or butter
2 ounces of sugar (if available) otherwise one grated apple.
2 oz of dried raisins
1 beaten or dried egg
1 pint of milk ½ teaspoon of cinnamon

Line a pie dish with layers of the sliced buttered bread, raisins and a sprinkle of sugar or grated apple between each. Beat up the egg or add the dried egg to the milk, then pour over the pudding and all to stand for about ten minutes. Cook at around 175 degrees for an hour or so.

Lord Woolton Pie
Chop a selection of potatoes, cauliflower, swedes, carrots, onions or whatever other vegetable you have available, and add one tablespoon of oatmeal.
Cook for 10 minutes, stirring regularly.
Put them in a pie dish, add a sprinkle of herbs, thyme, sage or parsley, as you wish, and a little brown gravy. Line the top with sliced potatoes or wholemeal pastry and bake in a moderate oven until the pastry has browned.

Beat the margarine and sugar, slowly add the dried milk then add the vanilla and beat until smooth.

Mix and shape in an egg cup. Set out on a tray. Do not cook just leave to harden.

Mix to a stiff pastry with a little milk. Cut in half. Roll out one round and spread with jam. Roll a second round and place on top. Or cut and form the other half into tiny balls and place evenly on top. Bake approx 40 - 45 mins at 180C until golden brown.

Soak bran, sugar and fruit in the milk for 30 mins in a mixing bowl. Add the sifted flour and BP and mix well. Put mixture in a greased loaf tin. Bake for approximately 1 hour at 180C.

Brenda in Always in my Heart proved to be an excellent cook, if it sometimes created problems by treating her as a servant instead of a family member. 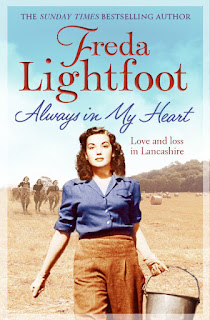