Peace in My Heart

One of my favourites available now, so do enjoy it.

About to be published by Ulverscroft. 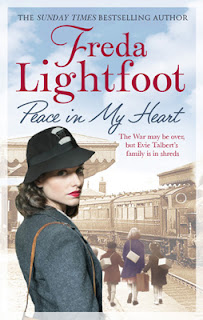 Having involved myself in a great deal of research about evacuees, I thought it would be good to show their love for Blackpool and the people who cared for them. This idea came from a memory of my grandparents running a boarding house in the centre of Blackpool during the war, largely occupied by evacuees, Polish aircrew, soldiers taking a break, and many of their wives and children coming to visit their husbands. They apparently had a very busy and fascinating time. I learned from my father that he’d been trained as a shoe repairer when he was young before the war, working in Lytham St Annes. He remembered collecting and delivering shoes for George Formby, a lovely entertainer who lived nearby. He also used to do a lot of fishing, and knowing exactly where to do this, he would charge people to show them or provide them with some of the fish he’d caught.

Here they are seated on the right hand side of the first row. My mother worked for his parents for a while, being his girlfriend. Once the war broke out they quickly married. She moved back to live with her own mother in Accrington and worked in the textile industry throughout the war, largely producing parachutes. My father was only twenty and had to report for infantry training at Squires Gate in Blackpool. That only lasted about six weeks although he would have preferred it to have been much longer. But the tragedy of the defeat of the Army in France and the evacuation of Dunkirk, speeded things up. He was then moved on to Manchester, Bury, Scotland and various other places throughout the war. Writing details of his service he said:

‘It was about this time that the Blitz on Manchester started, and the 6th Battalion was called in to give help to the Civil Defence and the Police. Along with other Army units this was a terrible time for the people of Manchester, as it was for other Cities in the country and we did our best to help. Our own barracks did not escape, and if not on duty we took shelter.’

After the war I recall as a toddler often visiting my grandparents and watching a performance of brightly lit puppets where a curtain was strung across part of the dining room. They told me that had often taken place during the war. We spent many happy days in Blackpool, my favourite visits being the Tower Ballroom, the Circus, Winter Gardens and riding a donkey on the beach. Always great fun for a young child. I remember my grandmother coming home from shopping one day to find a dusty mess of plaster and rubble on the staircase, my Grandfather having knocked open the entrance to the loft and planned to put in another bedroom. I used this incident and one or two others in the story, which was great fun. Eventually my grandparents sold the property and moved to Burnley, but my memories of this part of my family’s life, and my own memories post war, proved to be very much an inspiration as a setting for Peace in My Heart. The owners in charge of the boarding house in this story were, of course, not my grandparents but two sisters who cared for Joanne and Megan as evacuees. But would they stay with them or move back home?

Available from WH Smith and other good book shops.