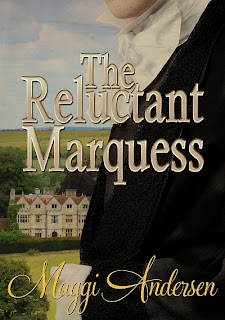 Excerpt:
In the corridor outside her chamber, he barely touched her gloved hand with his lips as he bid her goodnight.
“Robert?”
He turned back to her, his brows raised, looking every inch a marquess. “Yes?”
She put her hand to the emeralds at her throat. “Shouldn’t you return these to the safe?”
“That might be wise.”
“Come in and help me take them off.”
He followed her into her boudoir, as she removed her gloves. The room was empty for she’d told her maid not to wait up.
His touch on her neck felt cool and impersonal. He slipped the necklace into his pocket and turned to go. Charity touched his arm. “Won’t you kiss me goodnight?”
He bent his head and touched his lips briefly with hers. She put a hand on his chest, feeling tension there. He was always annoyed with her and she struggled with the unfairness of it.
“Stay a while?”
“I thought you didn’t wish me to make love to you.”
“Not in the salon. Here, in my chamber.”
His blue eyes blazed hot with anger. “Perhaps Lord Southmore can oblige. He knows where to find your chamber.”
Charity slapped his face. The noise seemed to reverberate around the room in the long silence which followed. They stared at each another, breathing heavily. “I did not deserve that. I find your behavior disappointing, my lord.”
Robert raked a hand through his hair. He gave a crooked grin. “That makes your true feelings clear then, my dear, doesn’t it?”
He turned on his heel and left her chamber, closing the door behind him. The room seemed too quiet with just the ticking of the mantel clock. Charity put her hands to her flaming cheeks.
His rebuff hurt as surely as if he’d thrust a knife in her heart.
Maggi Andersen
http://www.maggiandersenauthor.com
Posted by Maggi Andersen at 8:17 PM 2 comments:

To Take Her Pride by Anne Brear 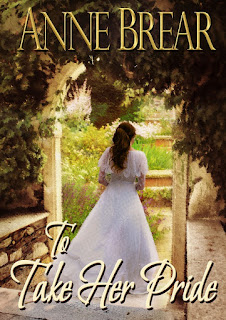 Writing under my new pen name of Anne Brear, my latest Victorian historical novel, To Take Her Pride, is set in 1898 Yorkshire. This is Aurora and Reid's story and will be available in paperback and ebook.Back blurb:Aurora Pettigrew has it all, a loving family, a nice home, a comfortable life. She’s waiting for the right man to offer her marriage, and the man for her is Reid Sinclair, heir to the Sinclair fortune and the love of her life.But, Reid’s mother, Julia, is against the match and her ruthlessness unearths a family secret that will tear Aurora’s world apart.Unwilling to bring shame on her family and needing answers to the allegations brought to light by Reid’s mother, Aurora begins a long journey away from home. She leaves behind all that is familiar and safe to enter a world of mean streets and poor working class.Living in the tenements of York, surrounded by people of a class she’d never mixed with before, Aurora struggles to come to terms with the way her life has changed. By chance, she reconnects with a man from her past and before he leaves with the army to war in South Africa, he offers her security through marriage.Aurora knows she should be happy, but the memory of her love for Reid threatens her future.When tragedy strikes, can Aurora find the strength to accept her life and forget the past?Excerpt: