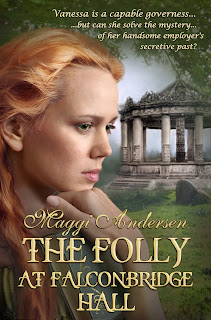 Maggi Andersen
I write sensual historical romance where heroes meet their match in feisty heroines. Add a dash of adventure, a murder or two, a mystery or intrigue. What better time to set them than the Georgian, Regency and the late Victorian period on the brink of the 20th Century. The Regency was a time of both opulence and abject poverty. Of economic and social change: the Napoleonic wars, the power struggle for the Americas, and the Industrial revolution when people began to desert the country for the cities. Celebrity Lord Byron wrote dark romantic poetry, and Beau Brummell defined and shaped fashion into a period of simplistic elegance. Men abandoned brocades and lace for linen trousers, overcoats with breeches and boots, and women abandoned corsets for high wasted, thin gauzy dresses. A spend-thrift aesthete known for his scandalous affairs, George IV, the Prince of Wales was made Regent in 1811 after his father was declared too mad to rein. Prinny presided over the elegant society of the ton, the Upper Ten Thousand, who defined themselves by an incredibly formal etiquette code which set them apart from the rising middle class.
Newer Posts Older Posts Home
Subscribe to: Posts (Atom)