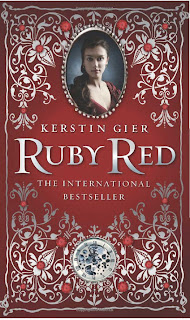 I don’t normally read YA Literature but this book was a gift – so I read it with the proviso that if it didn’t grab me, I wouldn’t persevere.  The opening chapter was pretty odd, all telling and dialogue which didn’t make much sense. However, the next chapter was better, and I was surprised at how Gwyneth grabbed my attention as the concept of the story started to be explained.  Seeing everything through Gwyneth’s unique perspective was funny and charming in places – however, I pictured her in my head at about eleven, when in fact it turns out she’s sixteen!

Gwyneth Shepherd's sophisticated, beautiful cousin Charlotte, not only gets A+ grades in all her school assignments, but she is also being groomed by her family to travel through time. Charlotte has apparently inherited the Montrose family gene which, once mature, can be harnessed and directed to complete the great mission of the time travellers.

Gwyneth and Charlotte live in a house of women, her Grandmother Lady Arista Aunt Glenda, Great Aunt Maddy and her visions, Gwyneth’s younger sister Caroline – and brother Nick. Poor boy, with all these batty women going on about waiting for Charlotte’s dizzy spells to throw her through time, no wonder he’s so flummoxed and gets chewing gum stuck in his hair.

The problem is, it’s not Charlotte who does the travelling – but Gwyneth, and she doesn’t have the benefit of ten years training that Charlotte has. To complicate things further, and frustrate Gwyneth, who certainly never asked for this, no one but Grace, Gwyneth’s Mum, and her friend Lesley, believes her.

Her veracity in question, Gwyneth is checked by ‘The Temple’ to confirm that what she says is happening to her actually is – they have ways.  Gwyneth is then presented with a few problems to solve – other than making sure she doesn’t get run over by a horse-drawn carriage when she appears in the middle of the road in 1850 that is – or being chased through her own house when the servants think she’s an intruder a hundred years before.

Why would Grace lie about Gwyneth’s birth date, and what happened to her cousin Lucy after she allegedly stole the first chronograph?  Then there is Gideon, a time traveller from another gifted family, the de Villiers, who thought he was to travel through time with Charlotte, but now has to make do with Gwyneth instead.

You cannot help empathising with Gwyneth, who is part of a fatherless family with her two siblings and her mother consigned to the servants’ quarters of their rambling, three story mansion located just behind Selfridges in Oxford Street – which would put its value at around the £5 million mark.  Not a three bed semi then, and yet Gwyneth seems at first to be not welcome but tolerated.

Gwyneth grows into her role as the family great white hope and starts to make demands on the matriarchs who bully her secretive mother. Even in time-travelling families there are conflicts, feuds and secrets.

The philosophy of the historical tradition of time travel was beautifully written, and I became fascinated with the poems and writings of St Germain as if they were real.  It’s well thought out and quite logical – and the precincts of ‘The Temple’ conjured all the mysteries and magic of Hogwarts.

This story would make a great film – and also makes me want to investigate the next two books in the trilogy – Sapphire Blue and Emerald Green. My only criticism is for the English translation from original German they have changed this beautiful cover!

Posted by Anita Davison at 7:00 AM No comments:

Email ThisBlogThis!Share to TwitterShare to FacebookShare to Pinterest
Labels: Review of Ruby Red by Kirstin Geir

Marriage was rarely about love, but generally about money, land, estates, politics or power. Henry IV knew that France was in a parlous state, and much as he might wish to marry Henriette d’Entragues, his mistress, he must do his duty and marry an Italian Princess, Marie de Medici. Henriette dubbed her ‘The fat banker.’

To any marriage, the bride was expected to bring a dowry and a bridal trousseau. ‘The marriage arrangements have been successfully concluded.’ Ferdinando I, Grand Duke of Tuscany, beamed exultantly upon his niece. ‘In return I have agreed to release France from its indebtedness, the balance to be given in cash to a total sum of 600,000 crowns, which will represent your dowry. Poor Marie. She was but a pawn in a game of politics.

A daughter of the bourgeoisie might have brought linen, household goods, pewter plates, candlesticks, or even livestock. Marie brought jewels in addition to the vast sum paid by her uncle. But then she was a royal princess. 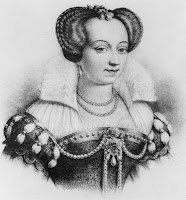 This property was not hers to keep. On marriage it passed into the possession of her husband, as did she herself. If the marriage was annulled, as in the case of Marguerite de Valois, Henry’s first wife, then the bridal dowry would be returned, and sometimes too her dower estates. Except in Margot’s case she had to fight for the return of hers, and until the finances were agreed between herself and Henry, she refused to grant him the divorce he craved to marry Marie de Medici.

Royal brides often went through a proxy marriage first, as the intended husband was more than likely thousands of miles away, and she would not be allowed to embark on such a journey without that security. It was as binding as the true marriage ceremony, which followed when the bride and groom actually met.

For Marie’s proxy wedding, The Duc de Bellegarde, Grand Equerry of France, together with an entourage of forty nobles, reached Livorno on the 20th of September. Seven days later he entered Florence, and on 6 October 1600, the proxy wedding took place, the Grand Duke Ferdinando himself standing in for the absent husband. His Eminence made his entry on horseback beneath a canopy held high by eight young Florentine nobles, preceded by all the ecclesiastical and secular bodies, sixteen prelates, and fifty gentlemen bearing halberds.


Afterwards would come the celebrations with a ball and banquet, hunting-parties, jousts, races, tilting at the ring and other sports, while the nights would be filled with dancing, plays, masques and ballets. The bride would then set out to go to her husband, a journey across land and sea which might take weeks or even months. And often within a day of meeting, the ceremony proper would take place.

Dressed in a gown of crimson, blue and gold, fashioned in the Italian style and glittering with jewels that represented a goodly portion of her dowry, she looked a queen in every respect, even one not yet crowned. About her neck she wore the valuable pearl necklace, given to her by the King, but the most magnificent ornament consisted of an octagonal diamond brooch. Worn on her stomacher it was framed by several smaller stones, each enclosing a portrait in enamel of one of the princes of her house, beneath which hung three large teardrop pearls. It became known as the Queen’s Brilliant.

And so the bride would be wedded and bedded to a perfect stranger, stripped of her possessions, her ladies-in-waiting often returned whence they came, and a whole new way of life in a foreign land would begin. Within days of Marie de Medici’s marriage, Henry returned to Henriette.

Henriette d'Entragues isn't satisfied with simply being the mistress of Henry IV of France, she wants a crown too. Despite his promises to marry her, the King is obliged by political necessity to ally himself with Marie de Medici, an Italian princess who will bring riches to the treasury. But Henriette isn’t for giving up easily. She has a written promise of marriage which she intends to use to declare the royal marriage illegal. All she has to do to achieve her ambition is to give Henry a son, then whatever it takes through intrigue and conspiracy to set him on the throne. 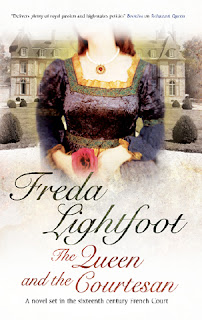 The Queen and the Courtesan can be found as a paperback or ebook here:
Amazon
Posted by Freda Lightfoot at 8:30 AM No comments: