During the Middle Ages, Christmas was seen as a sacred time, the time for the three Christ-Masses. Charitable giving to the poor was encouraged on Saint Stephen's day, December 26, which we know as Boxing Day.  On Boxing Day in the middle ages, the poor received money in hollow clay pots with a slit in the top, nicknamed 'piggies'. Unlike modern piggy banks, these clay pots had to be broken to extract the cash.

What about gift-giving among other classes?

Sacred gifts - of prayer books and so on - were seen as being appropriate for the holy Christmas period. Anne of Burgundy presented the Bedford Hours to Henry VI, her eight-year-old nephew, in 1430. The book is now at the British Library.

Gifts were sometimes given at the New Year. New Year's day, known at the time as the étrenne, a word derived from the Latin strena,  (used to mean both the gifts and the ritual exchange) was the traditional time to do so. Gifts might be food -Christmas was a time of feasting and, for example, it was considered bad luck to refuse a Christmas mince pie given by a host. A Christmas kiss of peace might be given under the green kissing bough of holly and other green-stuff and mistletoe, the plant of peace. Sometimes the 'gift' might be a joke, such as the 'book' given by the illuminators of Les Tres Riches Heures to the Duke de Berry, which turned out to be a block of wood.

At times the gifts were part of very formal processions and ceremonies. At the courts of Henry Tudor and Richard II the king rose on the day of the New Year and seated himself in his chamber ready to give and receive presents, given and received in strict order or rank. Sometimes the heralds and messengers bringing such gifts could also find themselves rewarded, as happened in the court of Richard II when the carver of the King was given a gold cup by the French King Charles. Kings and Queens could exchange gifts, often of rich jewels, as a public show of respect and affection. Rulers were expected to be generous but at the same time the size and value of gifts were ranged in order of class - kings and queens, their families, nobles, servants, right down to laundresses and cleaning-women. In some years, certain symbols might be used in gifts. In 1422 at the court of Charles VI, small jewels shaped like peacocks were given out to courtiers -  the peacock being one of Charles's badges.

In medieval England, such gift-giving also went on. People gave New Year’s gifts to those above and below them in the social hierarchy. For example, peasants who worked on landed estates brought gifts of farm produce to the local lord during the Twelve Days of Christmas. Custom dictated that the lord respond by inviting them to a Christmas feast. Personal gifts between people of equal status might have taken place but there are few records of such. In the records and for many kings and nobles, gift-giving meant ostentation and display.

Christmas and gift-giving features in several of my books. In my latest medieval romance, "Sir Conrad and the Christmas Treasure" I show my hero and heroine taking part in several medieval Christmas customs, including winter hunts, gathering and displaying Christmas greenery, Christmas fairs and dancing carols.

In the dark time of the year and the winter solstice, there might also be spirits and ghosts. My Christmas novella "Sir Baldwin and the Christmas Ghosts"
have Sir Baldwin and Sofia seeking to placate the restless dead in time for Christmas.

It is said that Aphrodite stands for love, beauty, pleasure, and procreation, and she can even mend a broken heart.
Can the goddess’ power be real? 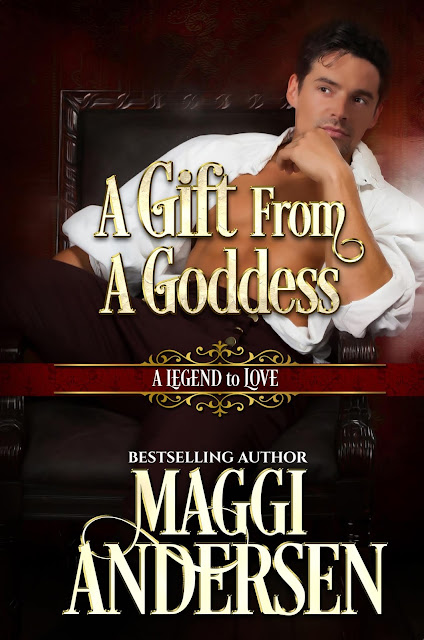 Posted by Maggi Andersen at 8:03 AM No comments:

A woman hurtled through time, Beyond the Fall

Yesterday my first time travel adventure was released. In BEYOND THE FALL, Tamara Ledbetter struggles to reorder her life after her husband leaves her for another woman.

In my extensive research of the eighteenth century for my other novels, I wondered what it would be like to take a modern woman from San Francisco, have her travel to England, fall back to 1789, and have to deal with a primitive life with few rights of her own.


Tamara Ledbetter, dumped by her arrogant husband, travels to Cornwall, England to research her ancestors. A trip first planned with her soon-to-be ex. In a neglected cemetery, she scrapes two fallen headstones together to read the one beneath, faints, and wakes up in 1789. Certain she’s caught up in a reenactment, she fast discovers she’s in the year of the French Revolution, grain riots in England, miners out of work, and she’s mistrusted by the young farmer, Colum Polwhele, who’s come to her aid. Can a sassy San Francisco gal survive in this primitive time where women have few rights? Could she fall for Colum, a man active in underhanded dealings that involve stolen grain, or will she struggle to return to her own time before danger stalks them both?

Tamara tries to make sense of her situation, thinking she's being tricked, it must be a reenactment. Here an excerpt when she's fist met Colum and he wonders why she's alone:


“I have a sister, and my father isn’t well.” Tamara sighed and wished Eva was with her now.  She glanced again at his face, and he had large turquoise eyes full of intelligence. He smelled of horse and a faint, spicy cologne. “We lost our mother three years ago.”
“My condolences. If you’re a single lady, who is protectin’ you then?” His dark eyebrows drew together. He was a good actor, she'd give him that.
“No one since...” Since her rat-bastard of a husband had run off with a slut, but she thought better of mentioning that. Her heart felt heavy for a moment, but more in irritation than sadness. “I protect myself. I’m perfectly capable.” At least she’d thought so, until a few minutes ago.
“That’s not advisable, for a woman to be on her own. Is your sister near? Do you have an abigail?” He dropped his horse’s reins, and the large animal stopped and stilled.
“My sister is across the ocean.” Tamara began to grow slightly annoyed by this farce. “And I don’t know anyone named Abigail.”
They climbed the stairs, which also looked less neglected. If there sat a cart and horse instead of her car on the hill, she’d scream.
At the top, Tamara sucked in her breath. The car park was gone, no cars, no asphalt to park on, only a field. The nausea bubbled up once more. What was happening!

For more info on me and my novels, please visit my website: dianescottlewis.org