To Entice a Spy, a story of espionage and unrequited love, by Diane Scott Lewis 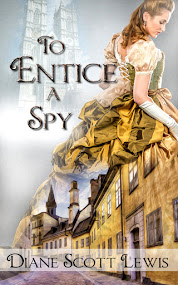 Spies, romance, the French Revolution and its effects on England, all mix together in intrigue in my recently released novella.

When I traveled in Cornwall a few years ago, in a cozy bookshop I found a book and map of eighteenth century Truro. I set a previous novel in this town but knew I wanted to place another one there, this one a spy story.

I planned a visit to Truro, but family medical conditions prevented it and I never got the chance to return to Cornwall.

Here is my novel's blurb:

Widowed Countess Eseld Trehearne seeks revenge for the brutal death of her female companion during a Paris riot. On her return to England, Eseld delves into espionage to defeat the French rebels.

Pierre, a  ruthless French spy, fights for the common man while disguised as an English aristocrat. He’s intent on revenge against those who oppose him.

With the spy stalking them and Robert in fear for Eseld's life, the fate of the couple verges on disaster.

Real life spymaster, William Wickham, makes a brief appearance in my novel. Wickham was a British civil servant and politician. He founded the British foreign secret service during the French Revolution. I have my hero Robert working with Wickham. 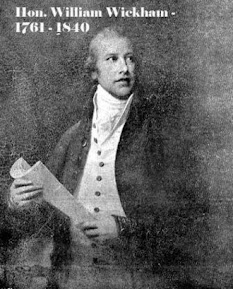 Can Eseld and Robert rekindle their love, or will rules of 'protocol' (he a mere baron and she a countess) keep them apart? Each must find their own way through heartbreak and the risk of murder that hangs over them. Is Pierre right in his demand for equal rights? Or is he just out to kill aristocrats, and seduce Eseld in the process?

Will love be enough to mend the differences between Robert and Eseld? She wants no man to command her.

Review from Novels Alive: "The dastardly villain ramps up the suspense and is exposed during a thrilling conclusion. This sweet Regency (Georgian, actually) romance ties up all the loose ends effectively. To Entice a Spy is a delightful light romance with a dose of suspense to keep it interesting."

For more on my books, visit my website: http://www.dianescottlewis.org

Diane lives in Western Pennsylvania with her husband and one naughty dachshund.

Posted by Diane Scott Lewis at 7:00 PM No comments: