El Parque Del Retiro - across from what street? 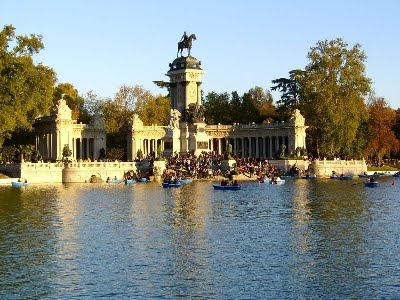 I first visited Spain in 1974 and fell in love with it. I lived in Madrid for a year on a beautiful boulevard called Paseo del Pintor Rosales, across the street from El Parque del Oeste. I am now in the process of writing my novel, The English Marquesa, the third novel of the Windword Trilogy and it takes place in Spain. I wanted the de Cordoba family mansion to be located across from a park, but Parqueo del Pintor Rosales and El Parque del Oeste did not exist in 1870, so I had to find a park that existed in 1870. El Retiro Park situated on the street named Alfonso XII existed in 1870. I wrote my chapter, and then realized that Alfonso XII in 1870 was only five years old and, of course, he wouldn't have a street named after him. After further research, I found that the name of the street at the time was Granada, later to be changed to Alcalá Zamora, and Reforma Agraria and then to Alfonso XII.

As I was researching the park, I found a few interesting facts that I thought I'd share with you.


"Madrid Gardens: Parque del Retiro (Park of the Retreat) - Calle Alcalá, Alfonso XII, Avenida de Menedez Pelayo, Paseo de la Reina Cristina
Retiro was once a forested royal hunting ground for Felipe II. The Duke of Olivares, as part of the Buen Retiro Palace, designed the park in the 1630s for Felipe IV. The Buen Retiro Palace was used until the era of Carlos III before being opened in part to the public in the 1770s. Unfortunately, the majority of the palace was ruined during the Napoleonic Wars. The 1.2 square kilometres / 0.75 square miles of park is best visited at weekends when pavement artists, puppet shows and street performers emerge. There is also the prospect of riding in horse-drawn carriages or hiring rowing boats on the lake."


"This is a large park in the city of Madrid. Originally it was a royal park for King Phillips IV who used it as a retreat for the royal family to escape the busy life. This also explains the name of the park, since ´retiro´ means retreat in Spanish. It is 130 hectares big and it opened to the public in 1868. The park contains many different sites to see, for example the Museo del Ejército, which is a museum with old armours, the sword of El Cid and the cross that Christopher Columbus took when he discovered America. The museum is also largely focused on the Spanish military history. Besides the serene nature and the museum, there’s also the monument of Alfonso XII in front of an artificial lake (which can both be seen in the picture above). Another statue is called El Angel Caído; it is most likely the only statue in Europe which is dedicated to Satan. Finally, there are also two palaces situated in the park, one of which is made completely out of glass."

The above information was taken from Go Study Spain and A View On Cities.
Posted by Maggie Dove at 12:54 PM