THE SESQUICENTENNIAL OF THE AMERICAN CIVIL WAR 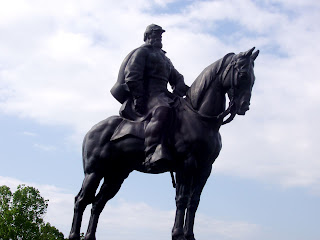 Shots fired at Fort Sumter on April 12, 1861 marked the commencement of four long years of internecine warfare, drenched in blood, which wrought the United States in its present form. Our observance of the Civil War's 150th anniversary will be of the same length, as it wasn't until April of 1865 that the war ended and the Union of States was restored. Given the magnitude of this historical event, it's most appropriate for us to reflect upon its true meaning and relevance today.

Clearly, enthusiasm for the upcoming observance won't achieve the same level experienced by many Americans during the Centennial of the Civil War. For better or worse, we aren't the same country that we were in the early 1960s. Nevertheless, it's important that we understand how the war forever changed our great nation. For real insight into this transformation, we must grasp mid-nineteenth century perspectives as we contemplate the participation of unionists, secessionists, slaves, freed blacks, and Southern white women during the conflict.

I was confronted by this broad spectrum of human experience when I researched, then wrote "Two Brothers: One North, One South". It's the story of Clifton and William Prentiss of Baltimore, their fellow soldiers, friends, and acquaintances. Closely based on real people and actual events, the novel follows these historical characters throughout the war; many of its scenes are based on anecdotes recorded in memoirs and letters of the period.

Walt Whitman encountered the Prentiss brothers at Armory Square Hospital and later eulogized them in "Memoranda During The War", thereby commemorating the sacrifice that each brother made for his cause. For this reason, I made Whitman the navigator of their story. While Whitman's fervent support for the Union and his abhorrence of slavery never wavered, his devotion to visiting wounded soldiers of both the North and South furnished him with a unique perception of patriotism and courage. His intuition is revealed in this passage from "The Wound Dresser":

"Arous'd and angry, I'd thought to beat the alarum, and urge relentless war,

But soon my fingers fail'd me, my face droop'd and I resigned myself,

To sit by the wounded and soothe them, or silently watch the dead;

Years hence of these scenes, of these furious passions, these chances,

Of unsurpass'd heroes, (was one side so brave? the other was equally brave);"

As we approach the sesquicentennial of a war in which six hundred thousand American deaths were suffered, the poet's words should be remembered and embraced. Walt Whitman believed that many of the participants were unsurpassed heroes: Union and Confederate soldiers for their devotion to duty; women on the home front whose role in society was forever changed; and African American soldiers who fought for the Union to achieve dignity and freedom. They were, one and all, American patriots.

If we achieve an understanding of those people and the times in which they lived, we will recognize the significant progress that we have made over these past one hundred fifty years. There is much to celebrate during the Sesquicentennial of the American Civil War.