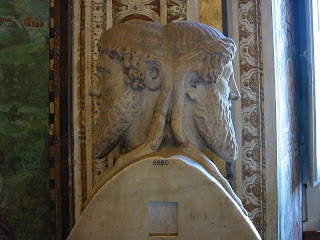 The influence of this Roman god echoes with us today in our modern calendar – the month of January is named after him.

So who was this god and why did the Romans pay him so much respect?

In Roman mythology, Janus was the god of gates, doors, beginning, endings, and time. He's depicted as having two heads – one looking forward, one looking back. The one head looks back at the last year, the other looks forward to the new year.

For Romans, Janus symbolized change and transitions. They worshiped him at major events such as at the beginning of harvest and planting, marriages, deaths, and other important changes.

Also, when you enter into a new place, you start by going through the door. For the Romans, he was the perfect choice to start their calendar.

Many temples were dedicated to him in ancient Rome. His image could be found on many of their gates and coins.

Interestingly, he has no counterpart in Greek mythology.

While we no longer worship how the Romans did, January is still a month were we look back to the previous year, assess our actions, and set new goals for the upcoming year.

May your January set you on a great start for the new year.

Stephanie Burkhart's upcoming release, "The Count's Lair" is a paranormal romance set in Budapest, Hungary in 1901. It will be released 1 FEB 2011 with Desert Breeze Publishing. Her previous novel in the Budapest Moon series is "The Hungarian."

You can find her on the web at:
BLOG:
http://sgcardin.blogspot.com


BOOK TRAILER FOR THE COUNT'S LAIR:
http://www.youtube.com/watch?v=DaiYNNpETok
Posted by Stephanie Burkhart at 3:38 AM

I like to think that each year starts off with a mythological basis. In that clean slate stretching ahead, the days, weeks, and months could very well be the stuff of legends.

Thanks for popping in, Maggie. January is certainly a month where I think we take a look at where we've been and where we want to go.

Roman and Greek gods are fascinating aren't they. Good luck with new release!

Happy New Year to you, too, Steph!

A couple of days late Steph bu tgood luck with the new book release and thanks for the interesting post. Since our new year began with hubby in ICU have no clue what this year will be like for us.