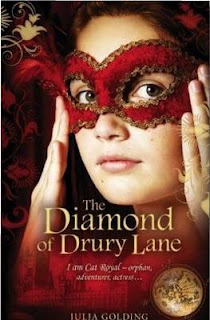 I reached the third chapter of this novel before I realised it was designed for children. However, that didn’t detract from its charm at all. In fact I wish I had had a 12 year old handy to whom I could introduce the genre of historical fiction, because this story is perfect for youngsters.

Discovered as an abandoned baby by the playwright, Mr Sheridan, Cat overhears her patron and a man named Marchmont talking about hiding a diamond in the theatre. Thus begins the problem which spans the entire novel 'Where (or who) is the diamond?'

Cat loves her unusual life and feels privileged to live behind the scenes of the theatre, running errands, watching the best plays in London from the wings and sleeping amongst the props and costumes in the attics.

After an accident with one of the props, she is saved by Pedro, a young black boy who has a genius for the violin. When Pedro runs into a local gang of criminal boys led by Billy ‘Boil’ Shepherd, she returns the compliment and attracts some punishment herself.  Cat is gutsy and charming, and also pragmatic – in that she shrugs off life’s injustices as something she has to deal with and endure.

The story takes young readers into the luscious atmosphere of the theatre and extends to the filthy alleyways and markets of London which are Cat’s playground. She mingles with the high and low of society, from the actors on stage to the lords and ladies in the stalls to the barrow boys in the grimy marketplace. The tale is packed with local colour and authentic detail. There is, of course the mystery of the diamond to be revealed too.
Posted by Anita Davison at 9:26 PM

I've not heard of this book, so thanks for posting the review, Anita. It has a beautiful cover.

Thanks Anita, this looks like it could be perfect for my 12 year old daughter who loves the theatre.