Make we mery, both more and lasse,
For now ys the tyme of Chrystymas
(From a 15th century carol)

When Christianity developed in the ancient Roman world, the winter solstice was already marked at 25th December. Followers of Mithras believed in the ‘unconquered sun’ and also held a feast-day for the sun on December 25th. 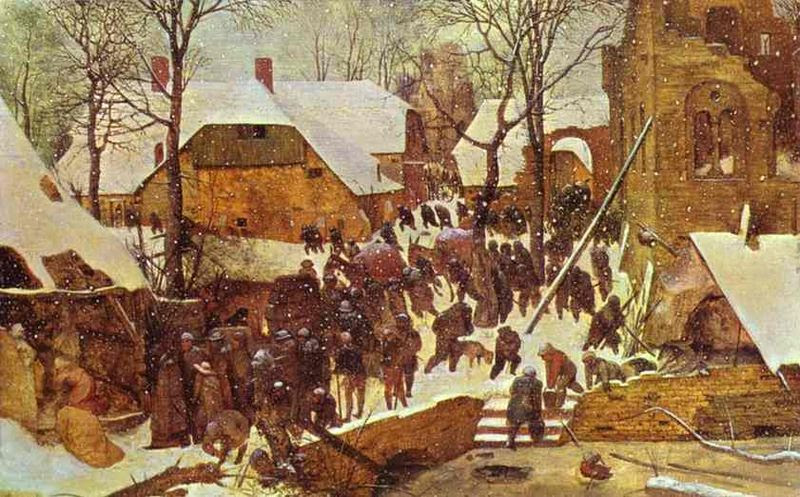 The gospels did not give a date for the birth of Jesus, but ancient beliefs in the Roman Saturnalia, the solstice and sun-worship led to the church choosing December 25th as the time of his nativity.

‘Christmas’ means ‘Christ’s Mass.’ In England in the Middle Ages three masses were celebrated on December 25th - the Angel’s Mass at Midnight, the Shepherds’ Mass at dawn and the Mass of the Divine Word during the day.

Before the three masses of Christmas there was the forty days of Advent. Advent was similar to lent, a time of spiritual reflection and preparation for the coming of Christ. Feasting and certain foods such as meat and wine were meant for be abstained from during advent (something the evil Denzils ignore in my historical romance The Snow Bride, set at this time).

The feasting and revelling time of medieval Christmas began on Christmas Eve and lasted 12 days, ending on Twelfth Night. There was no work done during this time and everyone celebrated. Holly, ivy, mistletoe and other midwinter greens were cut and brought into cottages and castles, to decorate and to add cheer.

The most important element of the revels was the feast. Christmas feasts could be massive – Edward IV hosted one at Christmas in 1482 when he fed and entertained over two thousand people. For rich medieval people there was venison or the Yule boar, a real one, and for poorer folk a pie shaped like a boar, or a pie made from the kidney, liver, and other portions of the deer (the umbles) that the nobles did not want – to make a portion of ‘umble pie'. Carefully hoarded items were also brought out and eaten and other special Christmas foods made and devoured. Mince pies were made with shredded meat and many spices. ‘Frumenty,’ a kind of porridge with added eggs, spices and dried fruit, was served. A special strong Christmas beer was usually brewed to wash all this down, traditionally accompanied with a greeting of 'wes heil' ('be healthy'), to which the proper reply was 'drinc heil'.

There were also other entertainments apart from eating and drinking – singing, playing the lute or harp, playing chess, cards or backgammon and carol dancing.

Presents and gift giving was originally not part of Christmas but of New Year. Romans gave gifts to each other at Kalends (New Year) as well as a week earlier at Saturnalia, and by the twelfth century it seems that children were already receiving gifts to celebrate the day of their protecting saint, St. Nicholas, and the practice soon began to extend to adults as well, initially as charity for the poor. As the Middle Ages wore on, the custom grew of workers on medieval estates giving gifts of produce to the estate owner during the twelve days of Christmas - and in return their lord would put on all those festivities.