The holly berry that shines so red,
Once was white as wheaten bread. 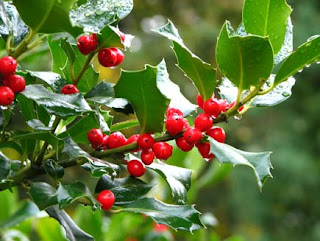 The holly and the ivy are common Christmas evergreens, still used in England for decorating houses at this time of year, and featured on many Christmas cards.

But until the 20th century holly was used medicinally in the winter to "thrash" chilblains - in other words the treatment was to give the feet a whipping with this spiny bush, an uncomfortable remedy that was supposed to work better if it drew beads of blood, like the berries the tree itself produces.
Margaret Poulter, the herbalist in The Lady's Slipper may well have tried this cure on one of her patients should they have been out in the snow too long. Whilst researching the novel I had to read many herbals and books on plant medicine. In my research I often read of this same strange treatment being used for what was probably arthritis too, and an ointment was made from the berries crushed into a salve to cure 'agues'. It is interesting that most of the conditions it was supposed to cure were 'winter ailments.'

In 1653 Culpeper suggested eating fresh holly berries as a purge, and instructions from a 1694 herbal say to boil the leaf-prickles in a posset which will "wonderfully ease the Cholick" (Pechey) 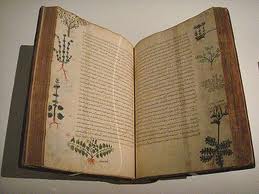 Many medicines in the 17th century were based on giving the patient a remedy with similar qualities to the complaint - so prickling pains in the stomach were likely to be treated with Holly, however uncomfortable that sounds! Nowadays however, modern medical herbalists use holly very little. And I think I will definitely leave my berries for the birds!
As well as its use in medicine, holly is a wonderful wood for crafts and in the past was used for knife handles
and fan-making, it being strong and light.The wood is very fine-grained, hard, and smooth, and almost ivory in color if it is not stained.

A book I would really recommend to anyone interested in English plant medicine would be Hatfield's Herbal by Gabrielle Hatfield.

The name Holly derives from the Anglo-Saxon holegn and Old High German Hulis both of which mean "holy".


Thus throughout Europe holly was believed to have sacred or magical properties and bringing holly branches into one's house in winter was supposed to ward off evil and bring good luck.Holly wreaths were also given as gifts during the Roman festival of Saturnalia, which is believed by many to be the festival from which Christmas was originally adapted. It was long regarded as unlucky to leave holly wreaths up beyond Twelfth Night so they are disposed of on New Year's Eve.Although Holly is associated with winter fire it is considered unlucky to burn sprigs of holly. I guess the one on top of the Christmas pudding must be the exception! 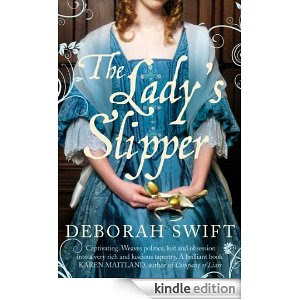 You can find out more about Margaret Poulter the herbalist, known also as a 'cunning woman', and her search for a successor to her craft in The Lady's Slipper.
'Her characters are so real that they linger in the mind long after the book is back on the shelf. Highly recommended.'The Historical Novels Review
'Top Pick!' RT Book Reviews
'Women's Fiction at its best' History and Women
'Brilliant saga' Romance Reviews today
'Rich and haunting' Reading the Past
'Utterly captivating' Karen Maitland, author of The Owl Killers
'Riveting narrative' For the Love of Books

Thank you for reading and A Very Merry Christmas Everyone.
Don't forget to come back tomorrow for Linda Banche's post about Mistletoe and the Regency Period.

Posted by Deborah Swift at 6:56 AM

I love your botanical articles, Deborah. You should consider gathering them up for a future book!

This is a fascinating subject, Deborah. I've been delving in to it for my current book. The holly berries appear here in our winter which is around June unfortunately. None at Christmas.

The old customs are still with us today! Let's hope we manage to tempt the sun back this year. I'm mentioning this page on my mythology website http://janebaileybain.wordpress.com
Happy Solstice!

I'm wincing at the thought of beating any part of me at all with a holly branch. Were they kidding? Ouch, ouch, ouch is all I can think!