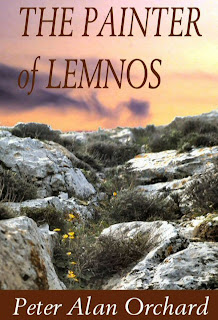 The new story follows Kindulos, a painter from Bronze Age Lemnos in the Aegean. When he is forced to flee the island for fear of his life, he finds himself amongst the soldiers of Agamemnon who are embroiled in the Trojan War. But he is sent back to the island, with a mission...
The Painter of Lemnos (c.12,000 words) is $1.99.

The dog was barking. The yelping filled the roof space and bounced off the walls of the houses on the street below. It brought Kindulos tottering to his feet, clawing at his ears with both hands and desperate for peace.

It was morning and a thin, grey light washed over the harbour. One of the ships, a broad-hulled merchantman, its square sail lowered, had been launched off the beach and rocked gently in the shallows.

The dog fell silent, its job done, its eyes bright with unfocused satisfaction. In the courtyard below Kindulos and the dog, a thin elderly man stood with the stub of a torch.

'Have you seen him, Senefu?'

'The runaway. Had his brother killed, that's all I know. The word's gone round since yesterday.'

'From his village, up the coast. The king's making a gift to the Akhaians again, so there's wine coming from all over. One of them probably passed it on, the wine people.'

Senefu began to laugh, a sound like jackals fighting. 'And they told you, Kratas? A miserable, cheating piece of rubbish like you?'

'I live up the road, my friend,' said Kratas evenly. 'I was sent round here. That's all. Other folk went other ways. No-one likes a man who cheats the gods or fratricide, and this one's both.'

There was silence for a moment or two, then Kratas mumbled, 'He's a painter, the man. Walls. Flowers and stuff.'

Kindulos lay down flat on the roof and froze to the stone. Not a word, Senefu, he begged in his mind. Not a word.

The dog set up a low, determined growling and Kindulos heard Kratas leave. The dull red of his torch brushed against the grey of the street and was gone.

A few moments later Kindulos heard footsteps on the stairs and Senefu's head appeared over the parapet.

'Leave,' he said. 'Now.' Apologetically he turned his palms upwards. 'If you're the one he's looking for, which I think you are, you have to leave the city. Every damn fool with a weapon will know who you are. No painter will be safe, no outsider will be safe and I won't be safe. That old rat wanted to get me out of this house years ago - don't ask, it's not your business - and finding you here would have the mob at my door.'

'So why protect me?'

'I'm not protecting you, I'm getting rid of you. If you're not here, you never came here.'

There was a ripple of sound up the street. From somewhere in the distance came shouting, wheezing and the rattle of hooves on the stones. Kindulos shrank down behind the parapet.

'Calm down, ' Senefu said. 'It's donkeys with cargo. There are ships leaving with supplies for the Akhaians, so the king's sending wine over to the leaders. Keep them drunk, keep them friendly, keep them on the plain outside Ilion.'

Kindulos stood up again, his decision made. 'Then the wine will come from all over the island and no-one will notice a stranger. Back up down the steps, Senefu. I'm going with them.'


Peter
http://www.peteralanorchard.net/
http://twitter.com/peteraorchard
Posted by Peter Alan Orchard at 3:53 AM

Email ThisBlogThis!Share to TwitterShare to FacebookShare to Pinterest
Labels: ancient Greece, Peter Alan Orchard, The Painter of Lemnos, Trojan War
Peter Alan Orchard
Peter was born in Devon but now lives in Yorkshire. His stories are set in the ancient and medieval worlds ands so far include a historical mystery, a children's adventure and a collection of historical short stories.