I downloaded the diary on my Kindle (I adore reading diaries), anyway, this diary by Sarah Morgan Dawson was written during the American Civil War. For anyone writing or interested in this era this book is a must read. 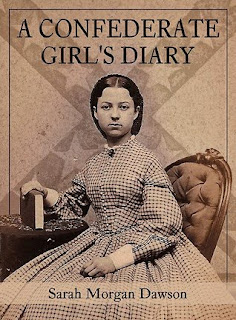 Just a small list of what Sarah writes about.
Her brother’s death in a duel in 1861.
Her father (a wealthy judge in Baton Rouge) dies very soon after.
Her feeling ashamed for wearing a confederate flag pinned to her dress in front of Yankee gentleman. Out of the crowd only she and 2 other friends wore them and she was later disgusted at showing herself up and being stared at.
The tale she writes of when the town is shelled and her mother and sister, sister-in-law, five babies and slaves fleeing with barely nothing. Their mother can barely run so a kind fellow stops and she catches a ride with him, leaving her two daughters alone to flee the city. They later return to their home only to nervously wait to do it all again at a moment’s notice. Sarah is embarrassed to be return atop a mule train and luggage.
She has a ‘fleeing bag’ which she straps to her hoops under her skirts in case they have to run from the house. Talks of grabbing toothbrushes, etc, as they flee.
Looking to buy shoes in the city and unable to find them and has to buy boy’s boots.
She is armed with a knife and her sister has a pistol.
She wishes only to be a boy and join her brothers fighting. She even contemplates dressing as a boy, but when laying out her brother’s clothes, she is too frightened to put them on, though she mentions other friends have done it and she applauds their courage to do so.
At one point she returns back to their home alone (after fleeing) to finish packing their belongings. She is alone all day packing while soldiers march outside. She cleans for the first time in her life and is mortified by the state of her hands. (what strikes me here is that before the shelling of the town, they had their sisters to chaperone them on a simple walk, but in the midst of a battle and with hordes of men stripping the city of valuables, she is allowed to return to the house and pack their belongings alone. In the evening her mother and sister finally join her. The slaves have gone, but some return. Also her sister, alone, went about the town getting passes etc.

Sarah’s writings of this time in history is like being there and makes for fascinating research.
Posted by AnneMarie Brear at 10:09 AM

Fascinating. It is interesting how pomp and "manners" become meaningless in the face of survival.