Regency Hygiene, or the Lack Thereof, Part I 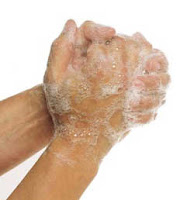 Regency England was a dirty place--and not only because of the large amount of horse manure around. Although the proverb "cleanliness is next to godliness" was known at this time, its meaning was different from today's interpretation.

For most of the era, cleanliness meant the daily washing of hands, face, and neck and wearing a clean shirt (for men), or a clean chemise (for women). The notion of immersing the entire body in water was anathema in Western Europe, and had been for the previous several hundred years.

Such an attitude did not exist in the ancient world. In the days of the Roman Empire, everyone--men, women and children, free and enslaved--visited the public baths every day. The Romans built baths in every corner of their far-flung empire. Even chilly Britannia, at the outer edge of their rule, had baths. Aquae Sulis (The Waters of the Goddess Sulis), now known as Bath, pictured right, received its Roman name from the hot springs located there.

As the Empire waned, so did its legacy, including baths and bathing. Public baths acquired the seedy reputation of encouraging licentiousness, although they remained fixtures in European life for centuries after Rome's demise.

The death of bathing occurred as a result of another death--the Black Death.

The Black Death (bubonic plague) was the worst pandemic the western world has ever seen. 30-60% of fourteenth-century Europe's population perished in agony due to this scourge. Panicked physicians, unaware that fleas transmitted the terrible disease, made a frantic search for any method of prevention.

The standard explanation blamed the planets for causing noxious vapors to rise from the earth and enter the body through the lungs. A new theory arose that skin softened by hot water became porous and provided the infection another entry. In terror for their lives, people stopped bathing. Bath houses fell into disrepair.

From the Black D

eath to the Regency, Western Europe grew dirtier and dirtier. Clothing, often tightly woven as another barrier to disease and made of hard-to-clean materials such as wool and silk, went unlaundered. The rich wore strong perfume to mask the often-overpowering stench of their neighbors' unwashed bodies. The poor just stank. Lice and fleas were rampant on everyone, regardless of class. The title of this 1638 Georges De La Tour painting is Woman Catching A Flea.

Dirtiness reached its peak--or nadir--in the Georgian era. By the time of the Regency, England had begun to clean up its act. The single person who was most influential in the resurgence of personal cleanliness was George "Beau" Brummell.

Thanks for the interesting lesson - even if you did make my skin crawl!
I wonder if the smell was bearable because they didn't know any better?

You're welcome, jt. I think you're right about the smell. If everyone stinks, you tend to get used to it.

Hi, Linda, great post, but I don't know if I'll be able to enjoy another Regency-set ballroom scene without wondering about the smells. LOL!

Thanks, Linda. There's so much fascinating information out there.

Keena, thanks. By the Regency, the smell wasn't so bad. By then, eople had started bathing again!

Another reason it took so long for our European ancestors to get with the program of daily bathing was that the Moors, who occupied Spain in the Middle Ages, bathed regularly. And the people of Spain, one of the more Catholic, of the Catholic countries, came to the conclusion that bathing was just another outward demonstration of the "paganism" of these invaders.

If they hadn't been so hidebound and prejudiced in their attitudes, all of Europe might have fared much better in terms of sanitation, for several centuries. Imagine, Louis XIV took only three baths in his entire life, and he lived into his seventies! No wonder perfume was so popular!