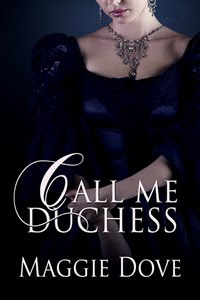 I was so taken aback to see this and so excited that I just had to share! Both my novels are in the best sellers list for Historical Fiction at Fictionwise, Ebookwise and ereader.com! All companies owned by Barnes and Nobel. Call Me Duchess is #2 and Angel of Windword is #12!

Call Me Duchess
by Maggie Dove
A rapist is loose in London?and he has plans for Marguerite Wiggins. Grippingly suspenseful and romantic, CALL ME DUCHESS is one young woman's stunning journey to find love in 1870s London while a dashingly handsome chaperone, a heinous villain, and her own lofty aspirations stand in her way. Left penniless by their father, Marguerite Wiggins and her sisters must find husbands during the London season or find work as governesses by season's end. Determined to become the next Duchess of Wallingf... more info>>
Sale Price: $6.95

A Prize for Princes
by Rex Stout
In this novel of intrigue and suspense, the masterful Rex Stout follows the fortunes of Aline Solini, whose angelic face hides a demon's soul. It is the face that captivates Richard Stetton, a wealthy young American, when he rescues Aline from a Balkan convent about to be sacked by marauding Turks. Stetton also enables Aline to escape Vasili Petrovich, the husband she tried to poison, and introduces her into society's highest circles. There Aline proves her talents for deceit and chicanery among... more info>>
Sale Price: $3.99

Charming the Prince
by Teresa Medeiros
He never lost a battle until he met the one woman who might succeed in... Charming the Prince.Dear Reader,My enemies know me as Lord Bannor the Bold, Pride of the English and Terror of the French. Never in my life have I backed down from any challenge or betrayed so much as a hint of fear--until the war ended and I found myself a reluctant papa to a dozen unruly children.Realizing that I couldn't lop their little heads off or throw them in the dungeon, I sent my steward out to find them a mother... more info>>
Sale Price: $7.99

A Secret Affair
by Mary Balogh
Beloved New York Times bestselling author Mary Balogh has written her most beguiling novel yet, in which the black sheep of the scandalous Huxtable family finally meets his match—in a woman of even more wicked reputation. “The Devil was about to be tamed.” Her name is Hannah Reid. Born a commoner, she has been Duchess of Dunbarton ever since she was nineteen years old, the wife of an elderly duke to whom she has been rumored to be consistently and flagrantly unfaithful. Now the old duke is d... more info>>
Sale Price: $7.99

Paper Roses
by Celia Collier
The dying wish of a childhood friend binds feisty Ciara Mackintosh in marriage to her family's sworn enemy, the bold laird, Alastair MacDonell. Through fragile roses crafted of paper, Ciara reveals her most secret dreams--dreams that must be powerful enough to erase the treachery of the past and free her once and for all to embrace the love of a lifetime.
Sale Price: $4.50

Catherine's Ring
by Elena Dorothy Bowman
In a small fictional town in the northeast corner of Massachusetts a mysterious package from out of the past had the residents buzzing. The original recipient had long since passed, and the sender of the package had died at sea in a tragedy that stunned the world. Where had this package been all these years, and why, even if it was postmarked the year it was sent, was it never delivered? When the present day recipient received the mysterious package, he wondered if he opened it, would he be open... more info>>
Sale Price: $6.50

Dark Angel/Lord Carew's Bride
by Mary Balogh
From New York Times bestselling author Mary Balogh come two classic tales of love turned dangerous, set amid the splendor of Regency England...a time rife with passion, betrayal, and intrigue. DARK ANGEL Jennifer Winwood has been engaged for five years to a man she hardly knows but believes to be honorable and good: Lord Lionel Kersey. Suddenly, she becomes the quarry of London's most notorious womanizer, Gabriel Fisher, the Earl of Thornhill. Jennifer has no idea that she is just a pawn in th... more info>>
Sale Price: $7.99

The Crystal Heart
by Katherine Deauxville
Emmeline, the wife to a powerful guild master, needs to provide her aging husband with an heir. Forced to make harsh decisions, she pays her servant to go out and to pay a man for a night of 'service' that will leave her with the child she needs to give her husband. She knows nothing about the nameless man who takes up her offer. For coin, he will give her what she needs. However, instead of paying the man and them parting with little thought to what happened, she gets a night of passion that ha... more info>>
Sale Price: $5.49

The Forever Girl
by Mike Bonner
A romantic, yet unsparing and authentic novel of the destruction of the ancient cities of Pompeii and Herculaneum that far surpasses The Last Days of Pompeii. Young Kara is taken into captivity after Roman legionaries and their allies overrun her village. Within the space of a few months, she goes from being a cherished daughter of loving parents to an orphaned and exploited Roman slave. At the age of eight, she is cast adrift in a culture that has little regard for human life-especially a slave... more info>>
Sale Price: $4.99

A Breath of Snow and Ashes
by Diana Gabaldon
Eagerly anticipated by her legions of fans, this sixth novel in Diana Gabaldon's bestselling Outlander saga is a masterpiece of historical fiction from one of the most popular authors of our time. Since the initial publication of Outlander fifteen years ago, Diana Gabaldon's New York Times bestselling saga has won the hearts of readers the world over--and sold more than twelve million books. Now, A Breath of Snow and Ashes continues the extraordinary story of 18th-century Scotsman Jamie Fraser a... more info>>
Sale Price: $8.99

Angel of Windword
by Maggie Dove
Evil forces are at play surrounding Angelique Beauvisage, but she has no clue. Sensuous and suspense-filled, ANGEL OF WINDWORD, begins with a murder that takes place four years before and turns into a perilous cat and mouse game played by two reluctant lovers, who spin a web of deception that only their love can unravel.
Sale Price: $6.95

Daughter of Spain
by Jeannine D. Van Eperen
Spain is in turmoil. In the 17th century, Inquisitor Sarmiento is zealously continuing the Inquisition, ridding Spain of those he considers infidels and also increasing his own land holdings at others' expense. A victim of the Inquisition Isabela and her mother are incarcerated in one of Sarmiento's dungeons. Her father has been killed. She is rescued when Don Carlos, Duque de Malagon, breaks into the castle to rescue his brother. He is too late to help his brother but Don Carlos takes Isabela a... more info>>
Sale Price: $7.50

In the Eye of the Storm
by Douglas R. Mason
In the Eye of the Storm. When the Roman peace was a memory and the Conqueror's peace a distant murmur, the land was in limbo. There was an uneasy calm and the jackals were in. It was a waiting time, with a swirl of undercurrents and secret power moves. There was space enough, as ever, for a man and a woman to make a life. But for a hardened warrior and a Thane's new bride? Garth acted out his destiny as Rider in Thane Ordlaf's household. Then, a swing of chance, a savage Northmen's raid and a la... more info>>
Sale Price: $6.99

Moon of the Falling Leaves
by Diane Davis White
Alone in the Wilderness. Jessica Maxwell finds out just how uncertain life can be when she and her children are stranded on the side of a mountain with winter looming. The Lakota Warrior. Swift Eagle has discovered his destiny in the flames of a vision that leads him to help this white family. Compassion Becomes Passion. Duty becomes desire when Jessica and Swift Eagle are forced to fight for their love, their survival in the old West.
Sale Price: $5.95
Posted by Maggie Dove at 12:08 PM

Oh Maggie, how brilliant. Very many congratulations - it is what we all need to know - that our books are in the public eye and doing well.

Thank you so much, Margaret and Deborah! I think I'm going to frame this. These results are probably fleeting but if I frame this, it will be forever!

I'm going to buy a copy, sounds just my thing.