At the beginning of my novel The Ladys Slipper, Alice is in mourning for her younger sister Flora. Whilst researching the novel I became interested in mourning jewellery. Although I decided it was not appropriate in the end for the character of Alice to wear it, I thought I’d share some of my findings with you - like most novelists I sometimes research things that end up not actually appearing in the book. But so they don’t go to waste ............
Mourning rings were presented as a memorial to the deceased to friends and family members. The earliest known example is a 15th c English ring, decorated with a skull, a worm and the name "Iohes Godefray."
﻿ ﻿

The skull as a symbol, though a little ghoulish to modern tastes, was still much used on mourning rings in the 17th century.
When the King was executed his friends bought rings and pendants to show their royalist allegiance. Such portrait pieces were made for Royalist supporters to mourn the martyred monarch and to support and further the cause of his exiled son. One of these rings presented in 1649 shows an intaglio portrait of Charles I on one side and a skull and a crown on the other. The interior inscription says, "The glory of England has departed."
﻿ 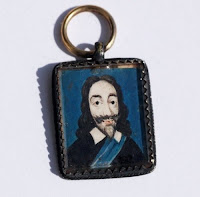 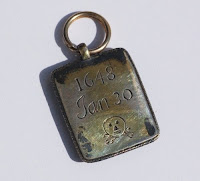 ﻿ Whilst history documents the monarch's execution on the day of January 30, 1649, the date 1648 on this piece is based on the Julian calendar, which was used in England until the 18th century. Using the Julian calendar, the year did not commence until March, so many contemporaneous mourning pieces record the execution as having taken place in 1648. (Pictures on the right from Collector's Weekly Magazine)
Many ordinary people included instructions in their wills on how many mourning rings were to be given out at their funerals, and the design. I have had some fun thinking up what sort of a design I would have and what the inscription should say!

William Shakespeare in 1616 declared that in his will that his daughter and wife should have rings stating "Love My Memory."

Samuel Pepys specified 129 mourning rings to be given away at his funeral. When it eventually took place in 1703 the social implications had been carefully considered, with the rings being ordered in 3 grades of different quality.

"Posy" rings, typically bands with inscriptions, were popular for sentimental purposes during the 17th Century. Posy rings are so called because of the "poesy" or poetry inscribed and are nothing to do with flowers. They were exchanged as gifts between friends, and also lovers, and it was common for men to wear them too. For funerals enameled skulls on rings were de rigeur and crystals with gold wire cipher, hair and often silk underneath grew in use frequently during the latter 17th century. 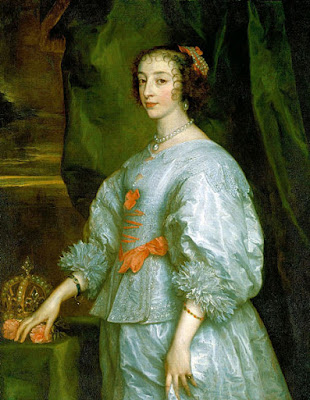 In the 18th century their poularity grew even more and finely decorated and incised mourning rings were made with white enamel for the death of a single person and black enamel used for a married person. The name, age, dates of birth and death were all inscribed around the edge of the ring. Funeral urns, coffins, doves, serpents, or portraits of the deceased were set in the ring surrounded by small seed pearls like tears.
Take a look at this plaited hair bracelet on Henrietta Maria’s right arm in a painting of 1632. It is very unfashionable now to have a desceased's hair made into an item you can wear, though common in the 17th century. Howver, items made of hair were not always mourning pieces. Hair bracelets could include miniature portraits on ivory or a cameo and could be a memento of a living sweetheart or relative. Hair was used to evoke the missing person, being a part of them that could be preserved and left with the wearer for sentiment. Its use in memorial jewellery started in the late 17th century.


Although I decided that Alice’s mourning in the book should not be  characterized by the wearing of mourning jewellery I found this whole area fascinating. If you want to find out more, and look at more mourning jewellery from other eras you can visit http://www.artofmourning.com/ 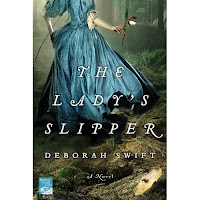 Intriguing and informative!
I knew only of such things in the Victorian period~brooches.

memorial jewellery is still very popular although it has changed from. You can get penants to put ashes of a loved one or even locks of hair.

A very interesting post. I also thought mourning jewelry was Victorian only.

Thanks for your comments Cerise & jt, did you check out the link to the new memorial jewellery? (2nd comment) A new take on an old idea, I guess.

I'm into family history and you've just explained all the references in wills to mourning rings. Gloves too were given away. Interesting.

Between You And I said...

So unique, never seen one of this before.