Victorian melodrama at its best! 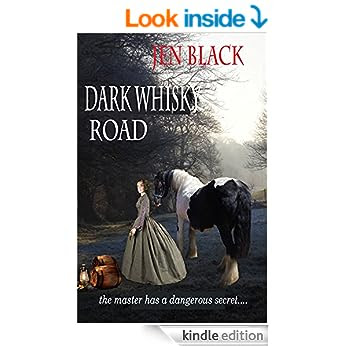 Melanie Grey escapes the south of England to take up a post in rural Northumberland as housekeeper to Lord Jarrow, a widower with a young daughter.
A strange but not unpleasant situation awaits her. Trying to conceal her own past, she grows curious about Lord Jarrow's night time excursions and is soon embroiled in whisky smuggling and deceiving Excise men....and all the time growing closer and closer to the master....

Excerpt: Chapter One
Melanie Grey pulled down the veil attached to her hat and glanced cautiously through the window as the horses slowed and turned into the inn yard. The door of the grey stone building stood open and a grey cat, tail curled neatly around its front paws, sat on the windowsill. Oak trees flourished behind the inn, their leafy branches bowing low over the heavy slate roof. Smoke from the squat chimney coiled and drifted into the still air.

It was a far cry from the grand hostelries of southern England she had frequented in the past. So much quieter here; no sign of frantic stable-boys and grooms hurrying to change the horses before the next coach arrived. Faded paint curled from the ancient sign of a blackbird above the inn doorway.
She heard voices. Angry voices. Frowning, she leaned closer to the coach window. In the dusty space between an abandoned wheelbarrow and the stable door, a tall youth argued with a child. Something the child said made him raise his hand and he slapped the boy, who staggered under the blow.
Melanie gasped, one hand rising to her mouth. The child, no more than eight or nine, did not cower away; instead, crimson with rage, he recovered his balance and kicked out with a hob-nailed boot that connected with the youth’s shin bone. Dancing out of reach, he yelled something that made the older lad snarl and lunge toward him.

Cold with horror, knowing she ought to intervene, Melanie grabbed the leather strap, released the window and their rough voices poured into the coach.
‘Come ’ere, you little guttersnipe!’
‘Not bloody likely!’ The child skipped nimbly out of reach.

‘Stop! Stop at once!’ Because she was afraid, her voice carried no conviction. The young man ignored her, but the boy saw her and offered a swift, gap-toothed grin as he backed rapidly away from danger. He collided with the gentleman leading his horse around the front of Melanie’s coach.
‘Ouf! Steady, lad!’ The man gripped the child’s shoulder to keep him upright. ‘What’s amiss here?’ His expression hardened as the bully, fists clenched, advanced on them both and he pushed the boy behind him.

Melanie, weak with relief, shuffled back into her seat. The boy was saved. She need do nothing. Once she would have been out there in the dust of the inn yard, standing toe-to-toe with the bully and caring not a jot for his regard. Her accident had scarred more than her face, she thought ruefully.

‘He’s your uncle, you say?’ The gentleman’s cultured, mellow voice sounded faintly amused. Or was it disbelief she could hear in his warm tone? ‘Then he should protect you rather than beat you.’
Edging forward, Melanie risked another glance at the scene outside. The grooms, who should have been changing the horses, loitered in a group by the stable door, grinning.

The child glared at his relative and stuck out his tongue.

The youth, his face ugly with temper, took a step towards the boy. ‘That lyin’ young varmint needs a lesson in doing as he’s told! Come ’ere, Toby Redman, before ah lose me temper and clatter yer ’ead against t’wall.’
Melanie shuddered.