A special welcome to fellow Choc Lit author Liz Harris!
Liz's new release is a historical set in Wyoming in 1887, but this story is not your usual story, please read on to find out more about Liz and her wonderful story.

What’s so special about Wyoming, I’ve been asked on a number of occasions.

It’s a fair question – I’ve set three historical novels in Wyoming. A BARGAIN STRUCK, set in 1887, tells the story of a second generation homesteader who lives on agricultural land south of the railroad. My novella, A WESTERN HEART, set in 1880, is located in ranching country north of the railroad. My latest novel, THE LOST GIRL, is set in the 1870s and 1880s, and is located in SW Wyoming, an arid, non-agricultural region, but one that is rich in coal. 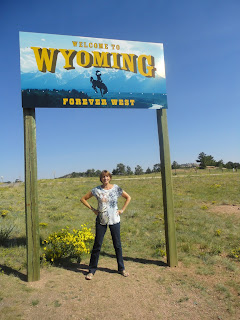 The answer is easy – I fell in love with Wyoming, its openness, its endless wide blue sky, its history and its people when I visited the State a few years ago. Not to mention the wrangler on the ranch where I started my trip, who filled me in on many historical details. A rugged, good-looking man he was, tanned from days on the range. Not that I noticed any of that - I was there for a greater purpose; namely, to research Wyoming in the 1880s.

Photo: Me at the border between Colorado and Wyoming

So what did I learn that I hadn’t been able to find in any of my research books?

I’ll start with the title I gave this guest blog. I learned that anyone approaching a homestead should holler, ‘Hello, the House!’ if they valued their life. The westward-bound pioneers of the mid 19th century often settled on land which had once been the home of native peoples, thus giving rise to potential strife. Also, there was growing tension at that time between the large cattle ranches and the small homesteads. A quaint desire to avoid being shot on sight would encourage a person to identify himself thus.

I hadn’t been able to find out how far mechanisation had reached outlying homesteads and settlements by the late 1880s. Earlier than that would have been easy – they had nothing – but a few years after they’d started their settlements, the answer wasn’t so clear. 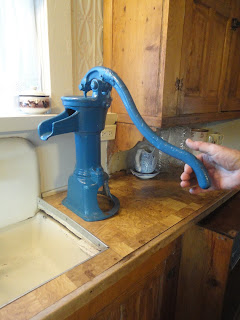 In addition to the main well on the pre-1890 ranch where I started my trip, there was a 28 foot deep, stone-lined well sunk right next to the kitchen wall. A pipe attached to a pump next to the kitchen sink ran down to the well. Bingo! They could pump water into the kitchen. PS. On winter mornings, they had to wait for the ice to melt on the pump arm before using it or they’d break it.

Photo: The pump beside the sink

Call me trivial, but I was curious about the sanitary arrangements. I knew there’d be an outhouse, but did it have a can inside – a sort of porta-potty de luxe - or what? No book answered this, but the friendly wrangler did. The hole in the ground was filled in when full, and the outhouse structure lifted up and moved to a different place. 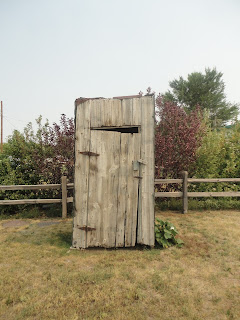 Interested in getting the feel of how it was to ride between the outlying towns, farms and around their ranches, I emulated the women of the American West and vaulted into the saddle.

Having been brought up on Hollywood westerns, I had always assumed that women at that period rode astride, but apparently not so. A museum curator told me that women had only ridden side-saddle until late in the 1880s. The change to riding astride hadn’t come about until there was a relaxation in the restrictive nature of women’s clothing. 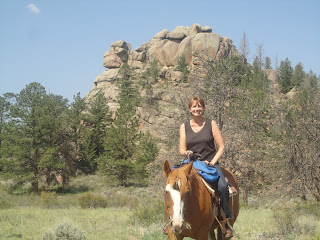 As you can see, I’m not sitting side-saddle, my skirts and petticoats tucked under me.  Rather, I’m wearing trousers and sitting astride my bucking bronco. Yes, bucking bronco. Minutes before the photo was taken, the horse had been rearing and snorting, desperately trying to unseat me. It had been all I could do to hang on. Yes, indeed!

The reason why women’s clothing became more relaxed in the late 1880s is an interesting one. Basically, Esther Morris, the first female justice of the peace in the US, appointed in 1870, wanted Wyoming Territory to become a State. A certain number of votes was required for this to happen, and because the population was so small, she needed women to go out and vote. Esther Morris, therefore, subtly let it be known that women could relax their style of clothing. Goodbye, tight, restrictive corsets; hello, divided skirts and trousers. Effectively, she bribed women to vote, and it worked. In 1890, Wyoming Territory became the 44th State of the Union. 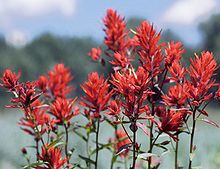 Photo: The Indian Paintbrush, the State flower of Wyoming, courtesy of wikipedia

But there was no such equality for the Chinese migrants, who started arriving in San Francisco from the Canton province of China in the 1850s. Until well into the twentieth century, the law ensured that the Chinese were very much second class citizens, with restrictions on their movement and with a ban on them becoming US citizens.

Ironically, the very State that was the first State in the US to promote the rights of women, albeit for pragmatic reasons, vigorously denied basic rights to the Chinese who lived and worked in that State. The history of Chinese and Americans in Wyoming is one of growing tensions between the two races, and it is against this background that I’ve set my love story, THE LOST GIRL.


Blurb for the novel: 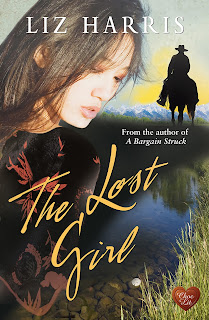 What if you were trapped between two cultures?
Life is tough in 1870s Wyoming. But it’s tougher still when you’re a girl who looks Chinese but speaks like an American.
Orphaned as a baby and taken in by an American family, Charity Walker knows this only too well. The mounting tensions between the new Chinese immigrants and the locals in the mining town of Carter see her shunned by both communities.
When Charity’s one friend, Joe, leaves town, she finds herself isolated. However, in his absence, a new friendship with the only other Chinese girl in Carter makes her feel as if she finally belongs somewhere.


But for a girl like Charity, finding a place to call home was never going to be easy.


Posted by AnneMarie Brear at 2:42 AM