OPERA IN THE GEORGIAN ERA by Maggi Andersen 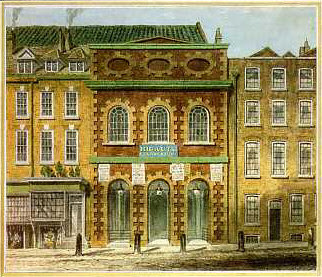 When my heroine, Miss Horatia Cavendish, attended the theatre in London for the first time in A Baron in Her Bed, in1816, it was very different than it is today. Opera goers gossiped with friends, peered at the audience through opera glasses and hissed weak performances while appreciating a well-performed aria. 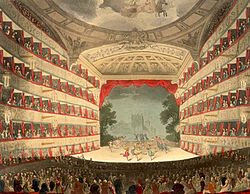 Today, opera is regarded as a ‘work’ based on the composer’s intentions for that work.  In the 18th and early 19th centuries opera and theatre was seen as an event. And as an event, people were free to roam around during the performance and converse, as the actors and singers performed. The event itself was the focal point, even from the perspective of most composers, and the spectators were important participants in the event, although talent onstage was necessary to draw a full house. As The Times acknowledged in 1789, for instance, “The total want of variety at this once elegant Theatre, (the King’s Theatre) the wretched dancers, have driven away those who used to make it a point to see and be seen. 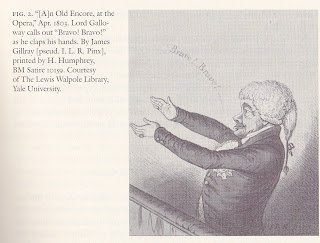 The social aspects of opera going were not entirely distinct from aesthetic concerns, Although many spectators attended for social reasons, the interactive behavior of the Georgian opera audience was framed within the context of the event orientation.
As mentioned in the letters of Lady Sarah Bunbury in 1764, members of the elite were more interested in the singers than the composers, to the arias particularly, and were not centrally concerned with the story. She wrote: “I hear the Opera is in high fashion, & Manzoli is vastly liked; the woman is a good singer, & I am told is excessively like me.” At the opera that Saturday: “I had a vile place & nobody to speak to, so I attended to the Opera, & I assure you without affectation that I was vastly amused, & liked the man vastly; so I did the woman, but she was not fashionable, which mortified me, for she is really very like me, only she squints a little.”  It was the talent of the singers which drew them. Many spectators, even those who were not connoisseurs, were quite knowledgeable about music and opera, but the scope of their knowledge was defined by Georgian tastes and standards, and thus it differed from the ideal laid out by supporters of the work-concept. 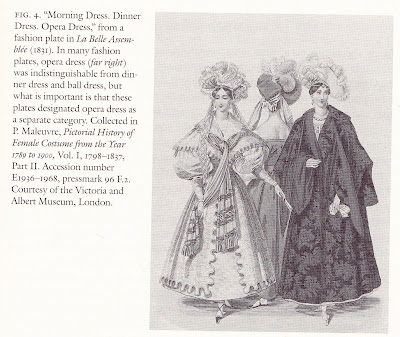 Because of their focus on solo arias, Georgian spectators were not required to give unrelenting attention in order to understand and appreciate an opera. This freed them up to socialize.
By the 1820s, members of the elite usually knew the names of the leading singers but focused on similar characteristics. Harriet Arbuthnot was one of the many opera-goers who reflected on the rivalry between Giuditta Pasta and Henriette Sontag in 1828: “We have got a new singer over who is, they say, to faire furor, Mlle Sontag. She was cried up before she came as the greatest beauty that ever was beheld but, however, in that respect she is not particularly admired. She sings beautifully, not equal to Pasta but with a facility & execution that is really enchanting.” Like Lady Bunbury, Harriet Arbuthnot focused on the singer’s beauty and technique.
The introduction of Mozart’s operas, which dominated the repertoire at the King’s Theatre from 1816 to 1820, began to change the concept of opera as an event when audiences revered Mozart as a musical genius and flocked to hear his 'work'.  His operas began to solicit silent, inwardly focused attention, while Rossini’s music could be enjoyed while socializing with friends.

Maggi Andersen is an author of Historical Romance and Romantic Suspense novels. Her latest release is A Baron in Her Bed ~ The Spies of Mayfair Series, Book One.
BUY LINK:
AUTHOR PAGE:
BLOG:
FACEBOOK:
TWITTER

Thanks so much for this. Great information.

Glad you enjoyed it, Ella! Thanks for dropping by.