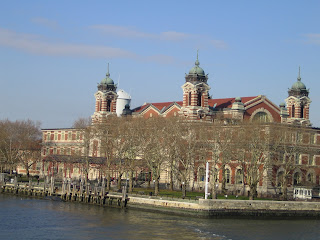 Ellis Island, the reception centre for all new immigrants to New York, newly opened in 1900 after the earlier wooden structure burned down. Ships arrived daily, filled with hopeful immigrants by the score, as many as 10,000 people to be processed. Russian Jews seeking escape from persecution, Hungarians, Slovakians, Poles, Italians, all speaking to each other in different tongues, eating strange foods, suffering the dangers and indignities of the crossing in grim silence. They came for free education, a free vote, low taxes, high wages, no religious repression, no kings or compulsory military service. They often left behind loved ones, poverty, starvation, unemployment, congested living conditions, oppression. In America they dreamed of living in a free land, with the hope of a good future.

Conditions on board had been deplorable, but arrival would surely end their agony? Unfortunately a new one almost instantly began. Thousands of people jostled ashore. Rations would run short, children crying, weather conditions, whether too hot or too cold, making the waiting almost worse than steerage, and anxiety was high. Uniformed officials alarmed those who had escaped from a military regime back home. Often they were brusque and rude, shouting and swearing at the frightened immigrants. They too were tired, hot and hungry, as well as overworked, often having done a 12 hour shift on low pay. Patience was short.

Immigrants arrived laden with sacks, carpet bags, small trunks, rolled-up bundles tucked under their arm or balanced on their head. Luggage would be stowed on the ground floor while they proceeded up the stairs. 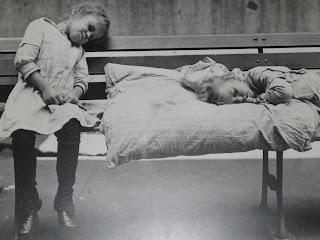 Everyone must first walk up the stairs to be inspected. Children over two had to walk unaided to prove they weren’t disabled. Anyone limping or short of breath was hauled out of line for further health checks. Anyone too carefully watching their step was suspected of having an eye problem. Fractious children or sulky teenagers could be pulled out of line and given a test for the feeble-minded. These stairs came to be known as ‘the six second exam.’


When they reached the top they would indeed catch their breath in amazement at what they saw. A huge, grand, high-ceilinged hall divided into railed channels along which they were herded like cattle. 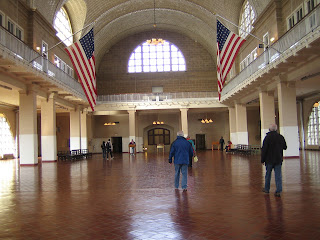 After that came the inspections. There would be a long wait in a queue, often for hours. Some would strike up music on an accordion or banjo, and do a little impromptu dance, while waiting. At the end of each line a doctor, dressed in the blue uniform of the US Health Service, carefully scrutinised every man, woman and child for physical or mental defects. Hair, face, neck and hands were closely examined, including the scalp for ringworm. Coats were unbuttoned to check for a goitre or tumour, or pregnancy. 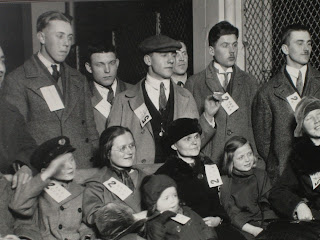 There followed many more tests in which the immigrant would be asked for the details as outlined in the manifest:Name, age, sex, marital status, nationality, occupation, last residence, destination in America, how much money they had, and whether the immigrant could read and write. Also, had they paid their own passage, and did they have tickets through to their final destination. Had they ever served time in a prison or poorhouse, or suffered from any deformities or illnesses. A lone female, unless met by a man, would be returned from whence she came, although sexual favours could gain admittance to the US. If she was suspected of being a prostitute she would be forced to endure a bodily search by a female attendant. 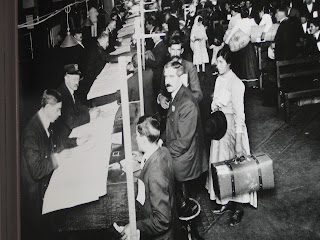 There were any number of reasons for rejection. If the person failed any of these rapid and perfunctory inspections, or gave the wrong answer, a chalk mark was placed on their back. C for conjunctivitis; Ct for trachoma; K for hernia; L for lameness; Pg for pregnancy; S for senility; and many more. One in five failed. These people were pulled out of line, even if wrongly labelled, in a most callous and impersonal manner, and made to wait in a special holding area, namely a detention pen which was enclosed by wire screens. Then they would be sent back from whence they came, often alone, on the same ship which had brought them to America, and was now obliged to take them away for no extra charge. 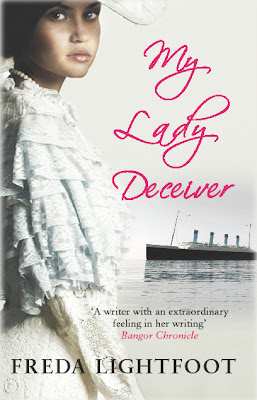 Rosie Belsfield feels as if her life has ended when she is rejected from Ellis Island and has to return alone to England leaving her family behind. But having boarded the ship with one identity, fate decrees that she leave it with another. The promise of a new life beckons, one of riches and even a title in beautiful Cornwall, but it is also one fraught with danger as she becomes caught up in a web of lies not of her making.
Posted by Freda Lightfoot at 8:00 AM

Frieda, absolutely fascinating to learn about the conditions at Ellis Island. Thanks for sharing.

Great post, Freda! I love the sound of the book.