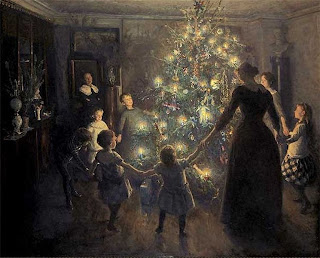 Ah, there's nothing like the woodsy outdoor smell of a Douglas Fir to put me in the Christmas spirit. Throughout the years a Douglas Fir or a Scotch Pine have been the most popular types of Christmas tree. I remember growing up as a little girl in New Hampshire, we'd go cut us down a pine. The smell was invigorating to the bones. Nowadays I have an artificial Douglas Fir that I put up in the my California home. Thank goodness for Yankee Candle who have a great selection of Christmas scents including pine, balsam, and fir. I may be missing the snow, but for me, the Christmas tree is an announcement that Christmas is coming. Now is the time to prepare.

In my research, I discovered Romans, Egyptians, and Celtics used to hang evergreen boughs to keep away evil spirits or decorate homes during the winter solstice. The customs weren't quite the same thing as a Christmas tree, but they speak to the tradition during this time of the year, setting a prescient for the trees to come.

Interestingly, evidence of the first Christmas tree comes from modern day Latvia and Livonia dating back to 1510. The use of the Christmas tree spread to Germany. There's a reference to a tree that one was put up in Bremen, Germany in 1570. The tree was decorated with apples, nuts, dates, pretzels and paper flowers. Bremen is a town in northwestern Germany. I would pass by it on my way to Bremerhaven during the late 1980's.

Martin Luther even has a footnote in the Christmas tree saga, adding candles to the tree because they reminded him of the stars that appeared on the night Jesus was born. The intent of the tree is to tell the story of Christ's birth with a star or angel topper and lights. Other decorations help to fill out the tree.

The Christmas tree became popular in Germany and followed the Hanovers to England. When Anne died, George 1 from Hanover, Germany was invited to take the throne. He brought his Christmas tree with him. The tree, however, didn't catch on with the public in Britain. Several European courts though began throwing up trees. Princess Henrietta put one up in Austria in 1816. France began putting up trees around this time. Denmark's Countess Wilhemine of Holsteinborg decorated hers in 1808.

13-year-old Queen Victoria even had a Christmas tree. In 1832 she wrote in her journal:

"We then went into the drawing room near the dining room. There were 2 large round tables on which were placed 2 trees hung with lights and sugar ornaments."

But the Christmas tree still hadn't caught on.

Victoria goes public with her tree.

In 1846 (or 1848, I find conflicting dates) Victoria, now Queen posed with Prince Albert and her children around her Christmas tree for the "Illustrated London News."

She was a big hit. Everything Victoria did was fashionable and that year she made the Christmas tree a household tradition.

In 1610, Tinsel was invented in Germany. They used real silver for tinsel right up until the mid-20th Century.

Glass Christmas ornaments made in Lauscha, Thuringia, Germany became popular in Britain and were often used to decorate the tree.

In the late 1880's in Britain, trees grew tall and were packed with decorations. Themed trees like the "Oriental" tree or "Egyptian" tree became popular.

Victorian passed away and so did the nation's passion for Christmas trees until the 1930's. Christmas offered a sense of security and Britain was ready to capture that feeling with the uncertainty festering around the world at the time.

Next: How did the Christmas tree get to America? Look for part 2 coming soon on my blog http://sgcardin.blogspot.com on 20 DEC 2012.

Question: What do you put on the top of your tree? A star? An angel? Something else? What theme or story does your tree tell? I'd love to hear your decoration ideas.

Author Bio: Stephanie Burkhart is a 911 Dispatcher for LAPD. Prior to that she spend 11 years in the US Army. Her latest release is "A Gentleman and a Rogue," Book 2 of The Windsor Diaries, her steampunk romance series.

"I was hooked in it and did not want it to end. All of you romantic historical fans don’t miss this one – it is a winner." - 5 Stars, Trudi LoPreto for Reader's Favorites

FIND ME ON THE WEB AT:

Posted by Stephanie Burkhart at 6:00 AM

Good article, Steph. I'm looking forward to your next one.

Always heard about Germany's connection to Christmas trees. Thanks for more insight into how they "came to be" a holiday tradition.

Top of my tree: I've had both stars and angels. Theme: just special ornaments; those given by friends/family or unique ones I buy. And, I love colored lights on a tree!
Merry Christmas!

In Medieval times, the English celebrated the Christmas season by going to church and listening to the story of creation. One the 24th of December the story in church was about Adam and Eve, the apple, the snake. The men of the place brought a fir tree to Christmas, then it was decorated with apples, to remind the villagers, serfs, peasants about temptation. You could say this was really the first Christmas tree.

They brought the tree to the church, not to Christmas... Sorry about that.

I enjoyed reading your history of the Christmas Tree, Stephanie.
My dad's family weren't big on Christmas trees. They just put pine boughs in pitcher on the table. i think this was because of my grandfather's fear that the candles on the tree would catch fire. He would let them light the candles then stand at the ready with a bucket of water...just in case. Kinda put a damper on things I think. Maybe because my mother's family were German and more into the tradition of a Christmas tree, they always had a big tree in the parlor decorated to the hilt.
Here in the south, we often use cedar trees. I like their lacy array of leaves and the smell is heavenly. My tree has ornaments that have been passed down the family and it makes me feel connected to my ancestors to see this odd collection of ornaments, many of them made by family members and kids.
A lovely blog, Stephanie

A fascinating post, Stephanie, and I totally agree with you about the wonderful scent of the Christmas tree! We usually put a star at the top of ours and then decorate it with anything red, silver and green - I like it all to match :)

Really interesting, thank you! I'm fascinated by the history of Christmas and its celebrations. We always have a real tree, mostly because the artificial ones are too flimsy to deal with the attentions of the cats and dogs!

What a nice summation of the history of Christmas trees. Back in the day when I had real trees, I loved Douglar fir trees the best. And on the top of our tree is a homemade star made by my husband from our first Christmas together. Simple and straight from the heart.

Maggi,
Christmas Tree Part 2 will be on my blog on 20 DEC and you can find my blog at: http://sgcardin.blogspot.com

Marianne,
I'm the same way, in that I prefer those ornaments that were given to me or have a homemade look. I also like putting bows on my tree.

Allison,
Wonderful insight - the way we celebrate Christmas today is different from even 100 years ago. Our Christmas traditions have evolved over the years.

Sarah,
Cedar trees are lovely. Quite honestly, I'd be scared about using candles on a tree too. While I think it would look gorgeous, there's a real fire hazard. I'm glad we have electric lights now.

Christina,
Yes, I usually put a star on and then I coordinate a little. This years blubs are red and silver along with our "homey" ornaments and bows.

Maggie,
I love how you use a homemade star. I don't think you can show your love any more than that.