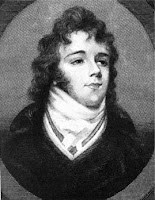 George Bryan "Beau" Brummell (1778-1840) almost single-handedly brought frequent bathing into vogue in the Regency. The son of a clerk, he was not particularly distinguished for his good looks, education or connection. But he was always very neat, his clothes were a masterpiece of simple elegance, and both his garments and his body were always spotless.

Brummell insisted that a gentleman be clean--clean as in total body immersion in water. His efforts succeeded in part because he had gained the favor of the crown prince, George, later the prince regent. When Brummell converted the prince, the upper classes followed, with the lower orders not far behind.

Brummell turned personal hygiene into an art form. He was famous for his daily three-hour regimen of scrubbing every part of his body, removing all the hair from his face, and then wrapping himself in

immaculate, simple clothes that were the antithesis of the male fashions of the previous fifty years. Although his manner of dress was at first called "dandyism", Brummell created the masculine attire we still use today: shirt, tie, jacket and trousers, all well-tailored, on a meticulously clean body.

When he was born, the standard of male beauty consisted of a wardrobe of costly, brightly-colored fabrics, powdered hair or wig, makeup (yes the men wore makeup) and high-heeled shoes. All over a dirty body and filthy hair, both heavily doused with perfume in an attempt to mask, usually unsuccessfully, massive body odor due to infrequent bathing. See previous post.

As an example, these stills from the 2006 BBC production Beau Brummell: This Charming Man show (left), the Prince of Wales before Brummell's influence, and (right), afterwards.

Brummell was not the first proponent of cleanliness. The return to bathing had started before he was born. In the mid 1700's, Philip Stan

hope, the fourth Earl of Chesterfield, wrote a famous series of letters to his son emphasizing personal hygiene. In France, Jean-Jacque Rousseau extolled cleanliness in his novel, Emile, or On Education (1762), although he personally was not that fastidious.

But the English considered anything French suspicious, and they turned to copious amounts of soap and water only when the consummately British Brummell arrived on the scene.

Brummell's story did not end happily. He fell out with his patron, the Prince of Wales. Afterwards, his gambling debts forced him to flee to France, where he spent the rest of his life. His gambling debts increased as his health declined. He died at sixty-two due to the complications of tertiary syphilis.

Today, we remember Brummell as a male fashion plate. In time, advances in science and the wider availability of soap and hot water cleaned up a world mired in dirt. But Beau Brummell hastened that day by making cleanliness fashionable.

Thank you, Linda. I saw the Masterpiece Theater on Beau Brummell and loved it. His influence on the standard of the dress suit for men has never fallen out in nearly 200 years! And Thank God he brought bathing into vogue! Imagine if he hadn't???

Thank you for these interesting posts, Linda. I had heard of Beau Brummell, but never knew he was responsible for the attire men still wear.

You're welcome, Raine. How right you are! Imagine anyone having influence over anything for two hundred years. And a world without soap and water *again* is a fate not to be comtemplated!

jtwebster, thank you, too. It's amazing the amount of wonderful information you can pick up by reading blogs. Lots of great blogs out there.

There was the fear that bathing weakened the body and exposed it to disease. Hard to believe now.