Writing about the Valois was fascinating as they were such a troubled family. All Catherine’s sons seemed to be blighted, probably as a result of inherent syphilis, and all suffered from consumption. Yet they were highly intelligent, well educated, and with the exception of poor Alençon, good looking. Their tutor was the Humanist Jacques Amyot. He wrote poetry and a work on hunting, and his happiest moments were when he would sit up late into the night talking to writers and musicians. On these occasions he would be entirely calm and content. 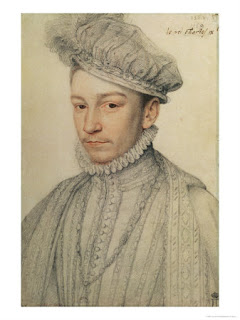 Charles IX was the most sensitive of the brothers, often emotional and easily moved to tears by a poem or a sermon. He loved hunting and all field-sports but was weak and unstable. If his wishes were thwarted by the smallest degree, his golden brown eyes would grow fierce, his manner turn brusque and uncivil, which could quickly deteriorate into a temper tantrum, often caused by jealousy of his brother Anjou.

Catherine controlled his every waking hour. The time he must rise, insisting that once in his chemise, the lords and nobles, gentlemen of the bedchamber and his man-servants should be allowed in for the King’s lever, as was the custom in his father’s day. After this came council business and dispatches until ten, when he was expected to attend Mass. A walk before dinner, which was taken at eleven, to be followed twice a week by an audience. Time was allowed each afternoon for him to ride, joust, or perform some other sport, and he was also expected to visit the Queen Mother, and the Queen his wife, according to tradition, before preparing for supper which he took with his family.

In addition, she set out careful written instructions on how he must address his councillors, what questions to ask local governors, how to organise appointments and honours and not simply give to those who begged for favours. 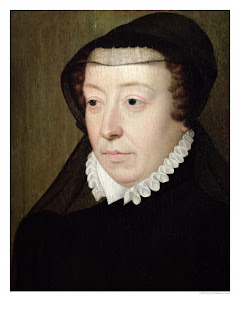 He was remarkably obedient and dutiful to his mother’s wishes, which was her intention, but if Catherine pressed him too far he would fall into a rage. Even Margot, who was fond of him, could not deny that he was an odd boy. He would often sink into worrying moods of deep melancholy, stay in bed all day, or be gripped by a mad frenzy when he would don a mask, waken some of his wilder friends, and, taking lighted torches, would go on a rampage around the darkened streets of Paris. They’d call on some poor unfortunate, drag him from his bed and beat him senseless, purely for the pleasure of it. Or he might turn on his dogs or horses and thrash them instead. When the lust for violence came upon Charles, there was nothing anyone could do to stop it. The mere sight of blood seemed to both terrify and excite him. I believe this flaw in him was the reason Catherine was able to terrify into giving his support to the massacre.

Catherine accepted these flaws as she did not expect the boy to live long, and in this she was proved to be correct. When Charles ultimately succumbed to the disease that had claimed his late brother, Francis II, Anjou, Catherine’s favourite, whom she loved with an almost incestuous passion, took his place on the throne. 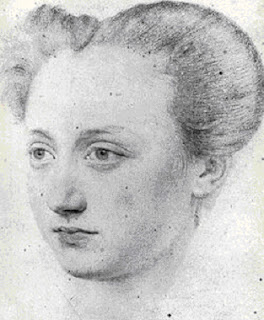 Charles IX only mistress was Marie Touchet (1549 - 1638) He loved and remained loyal to her for all his adult life. Besides his sister Margot, she was the only person able to control his mood swings, calming him and making him warm cinneman milk as if she were his nurse.

A pretty, gentle girl from a humble backward, she was in her late teens when she first became his mistress. She was well liked by Catherine, and when Charles married Elisabeth of Austria, fortunately his new bride had the wit to accept her as Marie created no problems. In time the two young women even became good friends. Marie bore him a son, which his wife sadly failed to do, Charles de Valois, who later became the Duke of Angoulême.

After Charles’s death, Marie married the marquis d'Entragues, Charles Balzac d'Entragues, and it was her daughter, Henriette, born in 1579, who became one of Henry IV’s most notorious mistresses. I've written about her in The Queen and the Courtesan,the last in the Marguerite de Valois trilogy which comes out in hardback in September.

Scene from Hostage Queen - in which Charles IX attempts to stand up to his mother, Catherine de Medici.

When the time came for the royal party to depart, Jeanne begged the King to allow her son to stay on an extended visit, and because Charles was soft-hearted and felt sorry for a mother being separated from her son, he readily agreed. Catherine entered the chamber just as Jeanne was thanking His Majesty for the favour.

‘What is this?’ she curtly demanded of her son, eyes cold. ‘Are you now making decisions on your own account, so soon after reaching your majority?’

Panic clouded his sensitive features, and Margot, feeling pity for the over-sensitive Charles, hurried to offer him her support. ‘I’m sure it would be but a short stay,’ she said, thinking what a relief it would be to be rid of Henry of Navarre for a while.

Charles agreed and hastily added, ‘Think how distressed I should be were we to be parted, Mother? Is it not unnatural for a family to be kept apart?

Such matters had never concerned Catherine, having rarely seen her own children as they were growing up, although she had frequently asked for portraits to be painted of them so that she could check on their progress. ‘I am sure the Queen of Navarre will think so.’

The two queens faced each other, the one furious, the other defiant. They might go through the motions of good manners and diplomacy, but they remained sworn enemies. The Queen Mother feared the lesser kingdom, with it’s strong Huguenot character, might raise an army against her with young Henry at its head.
Jeanne was afraid her precious son might be turned into a papist by the influence of the French Court and its Queen.

‘Pray leave us and permit me to discuss this delicate matter with the King.'

Jeanne curtseyed, paying the homage that was due to the other, more powerful, queen. ‘As you wish, Your Majesty, but the King has promised, and I trust him to keep his word.’

Alone with her son Catherine allowed her anger to show. ‘You had no right to make a political decision without consultation. Many factors need to be taken into account, and you do not possess the experience to make such a decision.’

Seeing how her brother’s eyes rolled back in his head, always a bad sign, Margot dared to interrupt. ‘Madame, the King is not well.’

Charles clung fast to his sister, hating to be scolded. ‘I can think for myself. I am not stupid. I am the King!’
Seeing that her brother was growing agitated, Margot began to stroke his hair, trying to calm him, crooning soft words in his ear.

Catherine ground her teeth in fury. ‘Of course, and are you not the cleverest of my sons?’ It was a lie, meant to pacify him. Her beloved Henri was more brilliant in every way. ‘Yet you need good counsel in order to make wise decisions. I would not have you taken advantage of by these Protestants.’

‘I have many friends who are of the new faith, and Jeanne is my aunt. I have ever had a fondness for her.‘
There was a fever now in his gaze and a foaming at the mouth as he began to chew on his fingernails. ‘I am King! I can do as I like, and I have given my word.’

‘There are times when even a king must break a promise.’

‘No, I will not, I will not!’ Then he fell to the ground and began drumming his heels in temper. Terrified he might harm himself Margot dropped to her knees beside him, desperately trying to prevent the convulsions which would surely follow. Catherine strode from the room calling for his nurse, knowing she must relent. The King had promised that the young Prince of Navarre could stay for a short holiday with his mother, and a king’s word must be kept, even though she held the power and always would.

Hostage Queen, now available in paperback and as an ebook. 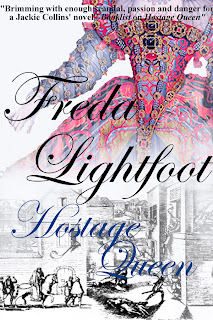 For more details about my books call in at my website www.fredalightfoot.co.uk
Posted by Freda Lightfoot at 8:31 PM