The inspiration for my latest historical romance, Witchchild, came from the myths and legends of Robin-the-Devil, a Major Robert Philipson who was reputed to have ridden down the aisle of Kendal Parish Church seeking his enemy, Colonel Briggs. The pair had been in conflict for some time, and Briggs laid siege to Robin’s island home and even sacked his family church at Windermere during the civil war. A house still stands on Belle Isle on Lake Windermere but not the one of the legend.

When through the Gothic arch there sprung
A horseman arm’d, at headlong speed
Sable his cloak, his plume, his steed.

My research unearthed no real information about the feud and so my writer’s mind devised my own, making the story family and romance oriented. I have changed the names of all characters as they bear no relation to any family in the Lake District. Apart from the inclusion of some of these myths and legends, is entirely fictitious. 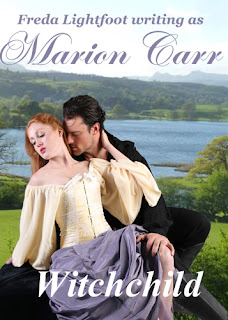 Lady Rowanna Blamire, the spirited and much-cherished daughter of a Royalist has lived for much of her life in Yorkshire because of a family feud, about which she knows little. But now her grandfather has died, her Parliamentarian uncle, Carus Blamire, has brought her home to Lakeland. His motive is to lay his hands on his niece’s fortune by marrying her to his stepson. When Rowanna refuses, he punishes her rebellious disobedience by auctioning her off for a month’s hard labour to the highest bidder.

Sir Robert Pennington, a cavalier known as Robin-the-Devil, makes a bid and carries her off to his island home. Is he too seeking possession of her fortune, or simply wishes to bed her? She finds him irresistible, but with the outbreak of civil war hostilities erupt to a far more dangerous level, and the family feud becomes a mystery she needs to resolve.

Extract:
WHO would buy her? Lady Rowanna’s fearful gaze focused desperately on the distant horizon, the glorious range of mountains bringing some ease to her troubled heart. She felt the June heat of the marketplace thicken as the throng of inquisitive farmers pressed suffocatingly close, making her heart beat all the faster. What was she doing here? What had brought her to this pretty pass? She really didn’t care to consider.

If she turned her head she could see the stocks beneath the ancient oak. It stood in a shady corner of Kendal’s main square where many a recalcitrant daughter or sharp-tongued wife had endured punishment. As she must endure hers. She supposed she should be grateful that her uncle had not subjected her to such pillory. Despite the stocks having been little used in this England of 1645, not since the last witch had been stoned there half a decade ago, Rowanna had feared she might be about to set a new precedent. She’d heard worrying talk lately of witch-finders stalking the land, tormenting innocent girls but none in Westmorland so far, praise be to God.

But what had possessed her uncle to flout family tradition of loyalty to the monarchy and embrace a brand of politics and religion that allowed such diabolical practices, and with such fervour? Could it be hysteria and superstition, or simply his desire for power?

Rowanna looked at the beads of moisture glittering upon his brow, the curl of disdain about his thin mouth, and the hardness in his narrowed eyes. Carus Blamire was lean and scrawny, a man who did not believe in excess, not even in his own flesh. He showed no loyalty or affection, not even towards family members, but believed utterly in his right to dictate and control. She shuddered to think how she was vulnerably in his hands now that her father was dead. Her uncle seemed stubbornly determined to marry her off to his stepson, her cousin by marriage. If he had his way they would be wed before the month was out, thereby giving him the pleasure of revenge on his dead brother. This alliance he planned struck a presentiment of dread in her heart. Nothing would induce her to agree.