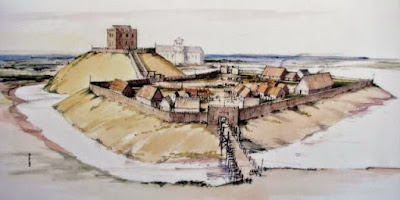 Whenever William the Conqueror wanted to make a statement (or a threat) to the local population, he erected a castle. This happened following the Siege of Exeter and the Battle of York featured in book 1, The Red Wolf’s Prize.


Typically William would leave a garrison of his knights with orders to erect and hold a castle. He had 5,000 knights at his command who could put down rebellions and guard his fortifications. The king was making his point with the populace that he was there to stay and any hope of rebellion was futile.

In Rogue Knight, the Conqueror built two such castles in the city of York in the course of my story.

Building a motte was a skilled achievement. The large mounds of dirt were constructed layer upon layer, with a layer of soil capped by a layer of stones that was capped by another layer of soil. The stone layers were needed to strengthen the motte and to assist drainage.

The larger mottes took longer to build…months, not weeks. The motte at Hampstead Marshall contains 22,000 tons of soil and took fifty men eighty days to construct. The motte at Dover, constructed in eight days, would have required 500 men.

Often, the local people were conscripted into the work, which must have been humiliating for the defeated Anglo-Saxons. There were three phases of castle building under William’s reign, about 80% of which were the motte and bailey castles. Eventually, many of the wooden castles were fortified or replaced with stone structures.

Tamworth Castle in Staffordshire overlooks the River Tame. Its sandstone and herringbone walls are all that survive of the “curtain wall” of the bailey. The first castle was a wooden structure, constructed by the Normans in 1070, but later, it was fortified with stone. Today, it is one of the best preserved Norman motte and bailey castles in England.


In Rebel Warrior, book 3 in the series, the royal court of Scotland is in a tall stone tower, a fortified hillfort that was considered impregnable. You’ll have to read the book to experience it! 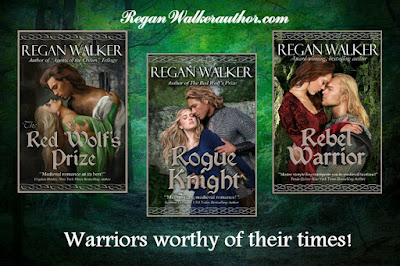 “This series captures the medieval era perfectly, creating the true sensation of traveling back in time to experience epic, riveting love stories that ignite the imagination. Beautifully written, perfectly paced and action-packed with passionate love affairs...
What more can you ask?”   —  The Book Review

The Medieval Warriors on Regan's website
On Amazon.
The Pinterest Storyboards
Posted by Regan Walker at 6:20 AM

Regan Walker
Award-winning, #1 bestselling author of Georgian, Regency & Medieval romance: the Agents of the Crown, Medieval Warriors and holiday romances. Website: http://www.reganwalkerauthor.com/. She is also a top reviewer on both Amazon and Goodreads with 900 reviews, and her own Historical Romance Review blog, http://reganromancereview.blogspot.com/.