Old, but not out!

A lovely write up about two of my earlier books, Kitty McKenzie and it's sequel. It's so lovely to see when someone enjoys my stories!http://aussiebookreviews.aussieblogs.com.au/2011/11/08/anne-whitfield-kitty-mckenzie-and-kitty-mckenzies-land-review-by-kelly-mclean/ 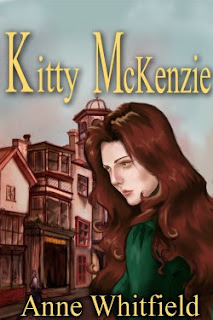 Suddenly left as the head of the family, Kitty McKenzie must find her inner strength to keep her family together against the odds. Evicted from their resplendent home in the fashionable part of York after her parents’ deaths, Kitty must fight the legacy of bankruptcy and homelessness to secure a home for her and her siblings.
Through sheer willpower and determination she grabs opportunities with both hands from working on a clothes and rag stall in the market to creating a teashop for the wealthy. Her road to happiness is fraught with obstacles of hardship and despair, but she refuses to let her dream of a better life for her family die. She soon learns that love and loyalty brings its own reward.

Kitty McKenzie path has taken her from the slums of York to the inhospitable bush of colonial Australia. Yet, when she believes her dreams will never be attained, she is shown that sometimes life can be even better than what you wish for.
1866.
Kitty McKenzie is gifted land in the far north of New South Wales. Life at the northern property is full of hardships as she learns how to become a successful landowner.
However, Kitty’s strength of will and belief in herself gives her the courage most women of her time never realize they have. A decided thorn in her side is the arrogant and patronizing Miles Grayson, owner of the adjourning run. He wants her gone so he can have her land, but he wants her even more.
Available in paperback and Kindle from Amazon sites.
http://www.amazon.com/Kitty-McKenzie-ebook/dp/B000R93D44/ref=pd_sim_kinc_1?ie=UTF8&m=A24IB90LPZJ0BS
Posted by AnneMarie Brear at 6:30 PM