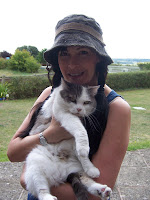 
I recently met another English historical novelist on Facebook - Grace Elliot, and was interested to discover that by day she is a vet.
I interviewed her to find out how historical romance and the world of science and animal medicine might meet, as they seem strange bedfellows. Although people might think it a little odd, incongruous even – evidence based science versus flights of imagination - Grace expained that the two very different occupations make perfect companions.
Grace said:
"Vetting is an emotionally draining job and as a professional I must hold my feelings in check, whereas writing is about expression and helping others to experience emotion. After a demanding day’s work, writing is my therapy; a completely different skill that helps me leave the pressures of work behind. Immersing myself in plot and description has taught me how to switch off from the real world and escape for a while to a time of satins and silks, where real men rode stallions and a woman with opinions was considered rebellious. 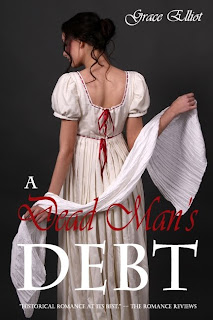 Deborah: What made you embark upon writing historical romance?

"Until five years ago, despite being an avid reader, I was prejudiced against the romance genre. Mistakenly, I had the impression romance was light weight fiction, a flimsy read for ‘losers’ (Before you throw things at the screen, let me say that it took me reading Prince Charming by Gaelen Foley, to see how utterly wrong I was.) In a eureka moment I realized there was enough pressure and angst in the real world, to make the escapism of reading historicals a sensible way of staying sane.
I describe myself as a ‘guerrilla’ writer. As a wife, mother and working woman, I take advantage of every spare moment and ruthlessly hunt out moments that would otherwise be lost to watching TV soaps (or doing housework!), to spend them writing instead."

Deborah:Tell us about your Regency debut novel, "A Dead Man's Debt" and what inspired you to write that particular story.
‘A Dead Man’s Debt’ is a story of blackmail, duty and unexpected love. I wanted to explore how an independent minded woman (Celeste Armitage) would fair in the Regency world of etiquette and restrictions. As a foil to unconventional Celeste, the hero, Lord Ranulf Charing, is a man hamstrung by duty who subjugates his own desires to protect the family’s reputation.
The inspiration behind the story for ‘A Dead Man’s Debt’ sprang from a portrait of the young Emma Hart (who later married Lord Hamilton and became Horatio Nelson’s mistress) The painting by George Romney shows an innocent yet lush young woman, scantily clad with a hint of bosom, brazenly staring out of the canvas with an allure that is quite hypnotic. It struck me as sensational for an 18th century work, that the sitter was not prim, proper, straight backed and starchy. At the time the picture must have been utterly scandalous.
So what if the woman in the portrait wanted to shock? From this, Lady Sophia Cadnum, (Ranulf’s mother) was born; a woman used as a brood mare, who resented her children. What if years later, this same portrait threatened to disgrace her son, forcing him to do the very thing she resented and marry from duty…"

Thanks Grace for taking the time to talk to me. You can find out more about Grace at
http://www.graceelliot-author.blogspot.com/
‘A Dead Man’s Debt’ is available on Amazon, Smashwords, Fictionwise as well as other eBook stores.

Posted by Deborah Swift at 6:48 PM

Thank you Deborah for welcoming me here today. I love this blog, all those delicious covers; I think I've just found myself a whole new TBR list!
Grace x

I am reading A Dead Man's Debt at this time and enjoying it very much. Grace's vet skills are obvious in her writing. I am learning things about animals that I never knew. The movies never taught me, for example, that you shouldn't ride your horse out in the slippery mud! That should have been a no brainer. Reading really does open many things up to the inexperienced.

Wonderful post. I love the romance of Lady Hamilton and Nelson, the portrait inspiring so much ingtrigue. Can't wait to read.

Thank you for stopping by Debbie and Karen. Happy reading x

...So what if the woman in the portrait wanted to shock? From this, Lady Sophia Cadnum, (Ranulf’s mother) was born; a woman used as a brood mare, who resented her children. What if years later, this same portrait threatened to disgrace her son, forcing him to do the very thing she resented and marry from duty…"

WoW! What a wonderfully evocative description to draw readers in.... I definitely want to read more.