A Rake's Progress Through Literature

HOW TO TAME A RAKE 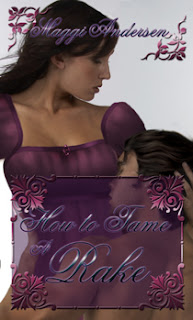 Blake, Viscount Dangerfield must marry Wilhelmina Corbet, his cousin three times removed, or lose his inheritance. It is a codicil in his despised father’s will. That he must marry at eight and twenty, when life is just as he likes it comes as a shock, but to marry a drab hoyden just out of the schoolroom,  a hayseed from Northumberland, is deplorable. The last time he saw her she had her hair down and was climbing a tree.
When Willy comes to stay at Hawkeswood, she proves to be everything Blake feared and more, riding his father’s untamed horse and rescuing a fox cub with a broken leg. Blake grits his teeth and decides that after they marry, he will leave her in the country to raise his child, while he returns to London, where his men friends and the ladies of the opera know how to live.
http://www.amazon.com/How-Tame-Rake-ebook/dp/B003XYETXO/ref=sr_1_1?ie=UTF8&m=A24IB90LPZJ0BS&s=books&qid=1305336890&sr=1-1

RAKE is short for rakehell, a historic term for a man of immoral conduct, who uses women heartlessly for his own ends.
In Restoration English comedy  (1660-1688) the rake was a carefree, witty, sexually irresistible aristocrat. The merry gang of courtiers, of which the 2nd Duke of Buckingham and the Earl of Dorset were a part,  combined riotous living with intellectual pursuits and patronage of the arts. After the end of Charles II rein, however, the rake took a dive into squalor. His fate was  sealed in debtor's prison, venereal disease or in the case of William Hogarth's A Rake's Progress, insanity in Bedlam.
In 18th Century England, a rake was seen to be someone who wasted his inherited fortune on gambling, wine and women incurring vast debts. He was also a man who seduced innocent young women and left them pregnant.
This thoroughly unattractive rakehell has been turned into a brooding hero by authors such as the Bronte sisters, and later, Georgette Heyer and Barbara Cartland. In modern historical romances, he continues to be redeemed by a feisty heroine.
My three novellas are available in e-book and are coming to print in an anthology, Regency Bucks soon.
HOW TO TAME A RAKE
STIRRING PASSIONS
LOVE AND WAR
http://www.maggiandersenauthor.com
Posted by Maggi Andersen at 12:11 PM

Maggie,
This is a fascinating way to look at how the idea of a rake changed over the centuries. Thanks.

Glad you enjoyed it, Keena.