The Enigma of Lady Jane Grey 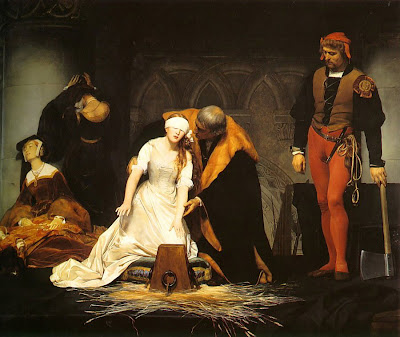 You can learn a lot from narrative paintings.
I became interested in Lady Jane Grey because I looked at lots of images of impending executions when researching The Lady's Slipper. I became fascinated in how people face an inevitable death as this happens to one of the characters in my book.

This gorgeous work by Delaroche shows the last moments of the seventeen year old Jane, clad only in a chemise, about to put her head on the block. Behind her the waiting women clutch her gown, and give way to their grief. It is hard to imagine how a seventeen year old girl today would be able to cope with an impending execution, but obviously tudor women were used to and perhaps somewhat immune to, the culture of rapid and violent deaths. Still, to face one's own execution for a crime of birth rather than of one's own fault must be doubly horrific. Many other artists have painted the innocent Lady Jane who was Queen for only nine days.

Lady Jane Grey was at one time considered as a bride for Edward VI of England, but he died early, before any marriage was consummated. Instead, it was arranged for her to marry Lord Dudley, the son of the Duke of Northumberland, who, against her wishes, proclaimed her Queen of England.

This was  to prevent Mary, the eldest daughter of Henry VIII - a Roman Catholic, from assuming the throne, but the plan back-fired and Jane was tried for treason. She was sentenced to death, but was spared by Queen Mary, who was fond of her cousin, and did not blame her for the rebellion. The following year, another rebellion occurred which again had the object of placing Lady Jane on the throne. In spite of her personal innocence, Lady Jane was executed along with all of the other conspirators.

"Well, her death was an awful business, and Jane met it with great bravery – but, despite her tender years, she was a religious fanatic even by the impressive standards of the day. In the Tower, she wrote to a Protestant clergyman who had reverted to Catholicism, informing him that he was “now the deformed imp of the devil”, his soul “the stinking and filthy kennel of Satan” and compared the reception of the Blessed Sacrament to an act of satanic cannibalism. Gentle Jane, my foot: she could have given the Taliban lessons in bigotry."

This quotation from the Daily Telegraph shows a quite different view of Lady Jane - a religious fanatic intent on suppressing Catholicism.
How good a Queen would she have been, I wonder? 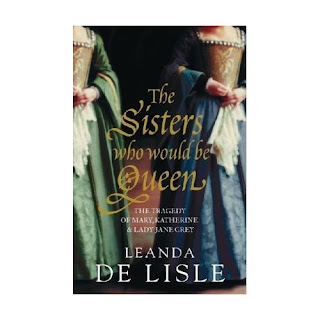 An excellent book I can recommend that will stay with you about this whole era is "The Sisters who would be Queen" by Leanda DeLisle. Do you know of others? I would be interested to hear of other recommendations for this period.


http://www.deborahswift.co.uk/
Posted by Deborah Swift at 12:00 AM

DeLisle's book is actually non-fiction (and a very good one!). For fiction, I like Alison Weir's Innocent Traitor.

Hi Daphne, of course you are quite right, it is non-fiction. I have amended my post to make that clear. Apologies, I am 'novel'-obsessed at the moment waiting to hear the verdict from the publishers on my second novel!

As Daphne commented, Alison Weir's Innocent Traitor is about Lady Jane and I found it excellent.

I must say your excerpt from the Daily Telegraph is eye-opening. I have never seen her in that light before.

Good luck with your second novel!

Sad, tragic and brutal, whatever her religious beliefs.

Daphne,
The religious fervor on all sides in that era is one that mystifies most modern sensibilities. Excellent post.

Thanks for your comments everyone, I think the intense brutality of the times goes hand in hand with the urge to find a meaning for it through religion, even to the point of fanaticism. Still, as Maggi said, the moment portrayed is a chilling one.

I saw this picture hanging in the Courtauld Institute of Art and eavesdropped on a tour party. I can’t find anything on the interweb to back this up, but according to the guide, it isn’t strictly a picture of the execution. It is a picture of a scene from a play about the execution. As he told the story, the executioner raised his axe and then the theatre lights were extinguished. The audience then heard the axe strike the block and a cabbage was dropped into the basket that was to collect the head. The sound was realistic enough to cause a panic in the audience who all fled the theatre. Apparently, the tights worn by the executioner are a clue to the presence of actors, as is the interior setting: she was executed outside. As I say, after a short search, I cannot find anything to verify this theory.

I say Courtauld, but perhaps I mean National Gallery. It was about 11 years ago this happened, and everything on the webs points to it having hung in the Nat and never in the Courtauld.