Satirists christened the reticule - the bag adopted by Regency ladies when their diaphanous dresses allowed no pockets - the ridicule. The reticule spoke of wealth and connections and were a delectable fashion item as well as being practical. Precursor to today's purse, the reticule provided a place to store important things like small parcels, spare change, a handkerchief, a small mirror, perhaps a snuffbox or powder,  smelling salts and letters. The name reticule, most likely came from France, derived from the Latin reticulum the Latin for 'net'.
Reticules frequently featured beading or embroidery and could be quite elaborate. They could be bought from milliners but many ladies made their own, often to match a spencer, parasol, gloves or shoes.

Rectangular and lozenge shaped, they were made of silk and after 1810, increasingly of velvet. During the Napoleonic wars they could be shaped like the military sabretache, each with a tassel from the lowest point. Toward the end of the Regency, they began using clasps as an alternative to the drawstring. They were a source of artistic endeavour, such as those embroidered with floral designs and silver spangles, and even political expression with the silk reticules distributed by the Ladies Society for the Relief of Negro Slaves.

The picture is of the beautiful Madame Recamier, using her expensive shawl to add luxury and sensuality to a very simple muslin gown. Fashionable ladies were spoken of as 'well draped' rather than well-dressed. In France Madame Gardel, a performer of the shawl dance would give instructions in the graces of the shawl. The shawls provided warmth for the evening where spencers were unsuitable. 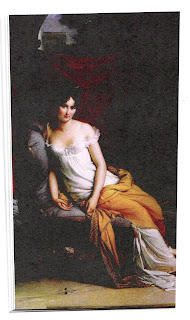 As gowns grew narrower, muffs grew in size. They were of fur or sealskin and white swansdown for the evening. Muffs allowed the wearer to carry billets-doux and other personal items easily concealed.
The fan was the essential evening accessory, as well as being pretty, they were also practical at assemblies where it was often crowded, hot and airless. Clever use of the fan could draw attention to a lady's eyes whilst concealing her smile. They depicted classical, romantic or fashionable scenes whilst conveying something of the woman's innate taste and sophistication. Political fans played their part in the French Revolution, spreading propaganda or concealing hidden messages of aristocratic support. It is believed that Charlotte Coray carried a fan in one hand as she plunged the knife into Marat.
There is more detail on the Regency on my blog: http://www.maggiandersen.blogspot.com/
Reference material: Sarah Jane Downing: Fashion in the Time of Jane Austen
Posted by Maggi Andersen at 4:12 PM

Loved this post as you migt expect. Haven't seen your reference book before so I'll go check that out.

Pleased you enjoyed it, Deborah. The book is published by Shire Publications UK.