"His Last Duchess" - Giveaway and interview with Gabrielle Kimm

Deborah Swift: Gabrielle Kimm and I met at an awards ceremony in the UK where our then unpublished books were shortlisted for the Impress Prize for New Writers. By chance we were staying at the same place and got chatting. We found we were both writing historical fiction, and when I read an extract of Gabrielle's work I loved it and could not wait to see the rest of it in print. Neither of us won the prize, and it has taken us a while to finish our books and find our respective publishers, but we have kept in touch ever since. Both of us have had our debut novels published this year which has been great, as we have been able to compare notes about the whole process and share in each others success.

Gabrielle's book - His Last Duchess, out today, is based on the poem "My Last Duchess" by Robert Browning. Like many other people I remember the poem from studying it at school, and I thought it was a fantastic idea for a book - the sort of idea you are amazed nobody else has thought of - so I asked Gabrielle to tell me a little about this process - the transition from poem to novel. 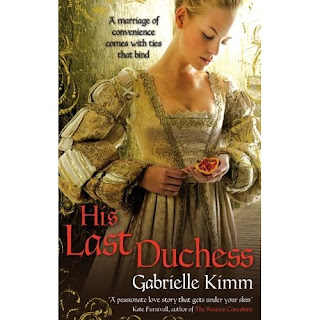 "How does a classic poem become a novel?"

Gabrielle: "I first met Browning's 'My Last Duchess' as an undergraduate and loved it. Then many years later, I rediscovered it when teaching GCSE English (it's in the AQA GCSE Poetry Anthology). It quickly dawned on me that the back-story to this extraodinary piece of writing would make a wonderful novel. It was all there, I thought: a complex and difficult central character, a raft of unanswered questions and a heroine in jeopardy, all set in glorious sixteenth century Italy. My mind raced off at once, and I spent several hours that day, frantically scribbling down all my ideas before they disappeared.


Right at the start, I spent ages mulling over the character of the duke, and worrying about the fact that the duchess, as described in the poem, seemed decidedly unattractive! According to Browning, the duke is proud - of his place in his family's dynasty, and of his prowess as a conoisseur of the arts - and he is highly articulate, despite his insistence that he has 'no skill in speech'. But I also reckoned that he is beset by self-doubt and inklings of paranoia - amongst several understated admissions, he tacitly admits to a very telling fear of losing face, saying as he does that he chooses 'never to stoop'.

The duchess is described by her husband in less than glowing terms: 'She liked whate'er she looked on, and her looks went everywhere'. That, I reckoned, implied that she was either a sort of sweet natured airhead, lacking any sort of discrimination, or she was an atrocious flirt. Neither possibility appealed to me in any way at all.


But then it struck me that the poem's only source of evidence for the character of the duchess - was the duke. The man who admits to having had her permanently silenced. How trustworthy could I believe him to be? Might the duchess actually be something very different: either wilfully misrepresented by the duke to place himself in a better light, or mistakenly believed by the duke to be something other than she is, because of some major psychological flaw in his own character?


Discovering the answers to these questions has been what has lain at the heart of the writing of this novel, and I have wondered on countless occasions at the skill of a poet who , in a mere fifty six lines, has created a character and a scenario that has engaged and intrigued me to the point of obsession for - literally - years! Little snippets of the poem form the basis of several key scenes in the novel - but I'd rather not pick them out - that's for the reader to do as they work their way through the book!


There has of course been mountains of painstaking research - everything from papal edicts and political machinations to how the average bloke kept his hose from falling down. Personally I love the research almost as much as the writing - which is just as well, as the genre dictates such minute investigations into almost everything!

Deborah: So there you have it. I know what she means about the research! Thanks to Gabrielle for taking the time to drop by.

Here is the official blurb about the book -

When sixteen-year-old Lucrezia de' Medici marries the fifth Duke of Ferrara, Alfonso d'Este, she imagines life with her handsome husband will be idyllic. But little does she know that he is a very complicated man. The marriage is fraught with difficulties from the start, and, as time passes, Lucrezia becomes increasingly alienated. For Alfonso, the pressure mounts as the Vatican threatens to reclaim his title should the couple remain unable to produce an heir. Only his lover Francesca seems able to tame his increasing fury. But Alfonso's growing resentment towards his duchess soon becomes unbearable, and he begins to plot an unthinkable way to escape his problems. Originally inspired by a Robert Browning poem, His Last Duchess gorgeously brings to life the passions and people of sixteenth-century Tuscany and Ferrara. It is a story you are unlikely to forget for a long time.

If you would like to win a copy of "His Last Duchess" Gabrielle has kindly offered a signed copy as a giveaway. Just leave a comment on the blog to be entered for the draw. Open worldwide. Closing date 31 August.
Posted by Deborah Swift at 7:17 AM

Thank you for including me in the giveaway. =)
tiredwkids at live dot com

Please enter me in the contest. The important Italian families of this time period are so interesting!

I'd love to win this!! Thanks for the opportunity!

This sounds interesting! I'd love to win this! If this is international that is...

and of course I forgot to put my email address...

I'd love to enter too, if it's open worldwide.

It sounds fascinating...please enter me.
Thank you
kaiminani at gmail dot com

Yes it dos sound like a good read and yes I am also hoping that it is open worldwide !

If so please enter me.

I would really, really love to win and read this book. Thank you for the opportunity to enter this contest.

Please include me in your giveaway.
Thanks
Debbie D
debdesk9(at)verizon.net

I think it's cool that she made a book out of a poem. I am not a big fan of poems because many of they leave me long to know more. The actual story.

I would love to win this book!

It is interesting to see a different source of inspiration for a novel.

I would love to win a copy of the book.

I'd love to enter! Thanks!

Thank you for the giveaway!

Looks great, count me in please:

I would love to enter, thank you. The book sounds really interesting.
jtwebster.books@gmail.com