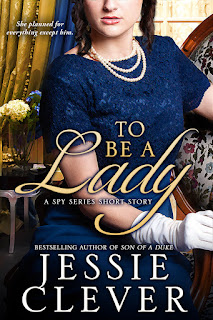 To Be a Lady: A Spy Series Short Story by Jessie Clever

She planned for everything except him.

Miss Jane Black enjoys a comfortable position in society.  As the daughter of a respected genteel farmer and former agent for the War Office, Jane has had the pleasure of planning a future filled with domesticity and quiet reflection.   But when her dying grandfather swears her to a dangerous promise, Jane’s expectations are shattered.

Fighting to keep her promise, Jane sees danger lurking everywhere, and when her near kidnapping throws her into the arms of the Marquess of Evanshire, another danger she didn’t know to fear emerges: the danger of love. 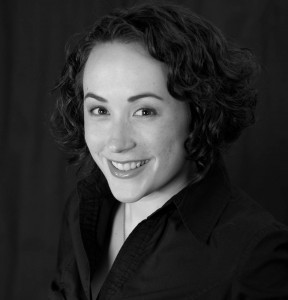 In the second grade, Jessie began a story about a duck and a lost ring.  Two harrowing pages of wide ruled notebook paper later, the ring was found.  And Jessie has been writing ever since.

Armed with the firm belief that women in the Regency era could be truly awesome heroines, Jessie began telling their stories in her Spy Series, a thrilling ride in historical espionage that showcases human faults and triumphs and most importantly, love.

Jessie makes her home in the great state of New Hampshire where she lives with her husband and two very opinionated Basset Hounds.  For more, visit her website at jessieclever.com.

Richard Black, the Duke of Lofton, died peacefully in his bed.  It was a Tuesday, as unremarkable as any other Tuesday, and he had gone to bed as he had any other Tuesday for the whole of his eighty-three years.  It was only as dawn broke through the curtains that his wife, Jane, found him gone when she woke beside his cold body.
His colleagues and friends had all remarked on such a virtuous end to a life lived in constant pursuit of death.  For in his work with the War Office, Richard Black had more than once traveled into the vicinity of death, caring not for the safety of his person but for the safety of an entire nation.  To have death finally come when one had lived a life as full as it was wide, having escaped attempt after attempt on his life by nefarious traitors and the like, it was a rather remarkable feat and oft mentioned at the clubs by those that survived him and admired him.
His funeral was quite the spectacle with everyone in attendance including the Earl Grey.  It was rumored even Peel would have appeared if he had been in the country at the time.  As it was, St. Paul's ran over with the respectable and noble, the pews crammed with the latest in mourning fashions.  The people were all there to see the great Richard Black, the Duke of Lofton, celebrated spy for the War Office, and in his later years, tremendous supporter of the reform acts sweeping through the House of Lords, laid to rest.
It was an exultant affair for all that those types of things could be.  His life was carefully articulated by his sons, each milestone given its due.  His achievements were itemized in detail and revered with exuberance by Lord Crawley, a man simply referred to as exemplary in his work alongside Lofton at the War Office.
As Richard Black's merits rang through the dome of St. Paul's, the attendees all bowed their heads, absorbing the passage of time, reflecting on their own life's achievements or lack thereof, and all pondered on the greatness of the man they had lost.
All except one, that is.
One slight head bent not in reflection but in fear.
Fear of the days ahead.  Fear of the unknown.
Fear of not being able to keep the last promise she made to her grandfather.

Posted by AnneMarie Brear at 11:11 PM

Thank you so much for featuring To Be a Lady! This is a wonderful blog, and I love being a guest here!