The town of Saint-Lizier in the Pyrenees dates from the 5th Century and has a rich variety of historical monuments of many periods. It is on the pilgrim route to Compostela and its cathedral is dedicated to St James. 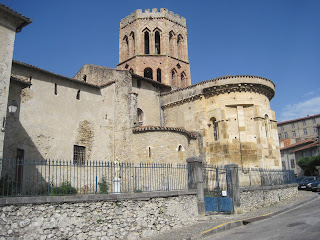 An 18th century Bishop founded a Hotel Dieu [hospital], which was completed in 1764. The entrance to the hospital pharmacy is through the blue gate in the photo above. The pharmacy remains exactly as it was originally built. The amber coloured wood used for the shelves and cupboards came from fruit trees and is made in the style of Louis XV. 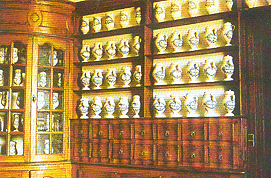 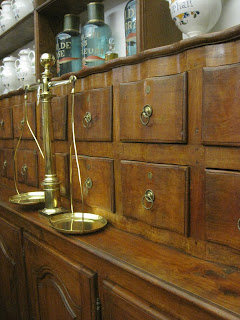 As well as the straight shelves on all four walls, there are four matching corner cupboards, with glass panelled fronts. All the pots and bowls on the shelves were made specially at a pottery near Toulouse. Every pot has the name of the remedy it contains painted on before the pots were fired, so there was no possibility of mistakes with the contents. 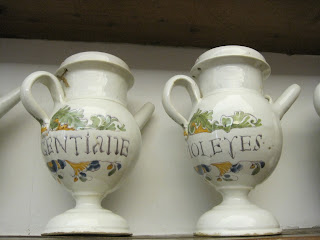 A little more grisly, in one corner cupboard there is the set of surgical tools, including knives and saws. There are also two large, marble topped tables for preparing medicines or for operating on sick people. 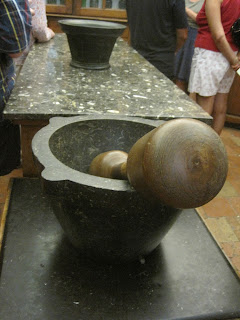 The Vinegar of the Four Thieves

From records kept in the hospital, it has been possible to reconstitute the 'Vinegar of the Four Thieves'. This remedy protected against the plague. During one terrible outbreak of plague in Toulouse in 1630, four thieves were caught stealing from the dead victims. These four did not become ill with plague, and the doctors discovered that the men had concocted a lotion that they spread on themselves, [hands, face, armpits and nether regions] which prevented the fleas from jumping on them. In exchange for the recipe, they escaped execution. The remedy is based on vinegar and many herbs, plus camphor.

April and May -with a touch of Eastern promise; May 2010