Some of us write to make sense of the world or deal with personal sadness. While writing wonderful stories of hope and fulfillment, Frances Hodgson Burnett struggled with depression throughout her life, which deepened after her oldest son, Lionel, died of tuberculosis in 1892.
Frances Eliza Hodgson was born in Cheetham, near Manchester, England. After her father died in 1852, the family eventually fell on straitened circumstances and in 1865 emigrated to the United States, settling near Knoxville, Tennessee. There, Frances began writing to help earn money for the family, publishing stories in magazines from the age of 19. In 1870 her mother died and in 1872 she married Swan Burnett, who became a medical doctor after which they lived in Paris for two years where their two sons were born before returning to the US to live in Washington D.C. There she began to write novels, the first of which That Lass o' Lowries, was published to good reviews.
She is best known for her children's stories, Little Lord Fauntleroy (published in 1885-6). Originally published as a serial in the St. Nicholas Magazine between November 1885 and October 1886, then as a book by Scribner's in 1886. The accompanying illustrations by Reginald Birch set fashion trends and Little Lord Fauntleroy, also set a precedent in copyright law when in 1888 its author won a lawsuit against E. V. Seebohm over the rights to theatrical adaptations of the work.
A Little Princess is a 1905 children's novel. It is a revised and expanded version of Burnett's 1888 serialized novel entitled Sara Crewe: or, What Happened at Miss Minchin's Boarding School, which was published in St. Nicholas Magazine. According to Burnett, she had been composing a play based on the story when she found out a lot of characters she had missed. The publisher asked her to publish a new, revised story of the novella, producing the novel.
Based on a 2007 online poll, the National Education Association named the book one of its "Teachers' Top 100 Books for Children." It was one of the "Top 100 Chapter Books" of all time in a 2012 poll by School Library Journal.

My personal favourite was The Secret Garden.
Burnett enjoyed socializing and lived a lavish lifestyle. Beginning in the 1880s, she began to travel to England frequently and bought a home there in the 1890s where she wrote The Secret Garden. The garden is the book's central symbol, inspired by Burnett's interest in Mary Baker Eddy's Christian Science theories. The secret garden at Misselthwaite Manor is the site of both the near-destruction and the subsequent regeneration of a family. Using the garden motif, Burnett explores the healing power inherent in living things. The story constitutes a struggle between common sense and the accepted wisdom of the day, in which common sense wins.
Initially published in serial format starting in the autumn of 1910, The Secret Garden was first published in its entirety in 1911. It is now one of Burnett's most popular novels, and is considered to be a classic of English children's literature. Several stage and film adaptations have been produced.

She divorced Swan Burnett in 1898 and married Stephen Townsend in 1900, and divorced him in 1902. Towards the end of her life, she settled in Long Island, where she died in 1924 and is buried in Roslyn Cemetery, on Long Island.

In 1936 a memorial sculpture by Bessie Potter Vonnoh. (her beautiful sculptures are well worth a look or a visit if you’re fortunate enough. A statue of Bessie Potter Vonnoh's was erected in her honour in Central Park's Conservatory Garden. The statue depicts her two famous Secret Garden characters, Mary and Dickon.

Bessie Potter Vonnoh (1872–1955), was one of the most successful women artists of her generation. She specialized in accomplished images of women and children. At a time when the field of American sculpture was dominated by men creating large, public monuments, she designed intimate works for domestic interiors and gardens, elevating the quality and appeal of small bronze, marble and terra cotta sculptures. Launching her career in the time of industrialization, urbanization and the women’s rights movement, Vonnoh contributed to the dramatic transformation of American society. Yet, while she came to embody the “New Woman,” her characteristic imagery—blissful domestic life—supported conventional ideas of women as icons of beauty and moral guardians of the home. 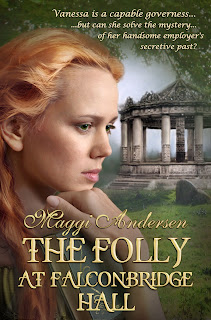 The Folly at Falconbridge Hall released May 8th with Knox Robinson Publishing.
Vanessa Ashley felt herself qualified for a position as governess, until offered the position at Falconbridge Hall. Left penniless after the deaths of her artist father and suffragette mother, Vanessa Ashley draws on her knowledge of art, politics, and history to gain employment as a governess. She discovers that Julian, Lord Falconbridge, requires a governess for his ten-year-old daughter Blyth at Falconbridge Hall, in the countryside outside London. Lord Falconbridge is a scientist and dedicated lepidopterist who is about to embark on an extended expedition to the Amazon. An enigmatic man, he takes a keen interest in his daughter's education. As she prepares her young charge, Vanessa finds the girl detached and aloof. As Vanessa learns more about Falconbridge Hall, more questions arise. Why doesn't Blythe feel safe in her own home? Why is the death of her mother, once famed society beauty Clara, never spoken of? And why did the former governess leave so suddenly without giving notice?