RATIONING AND RECIPES IN WW2 by Fenella J Miller 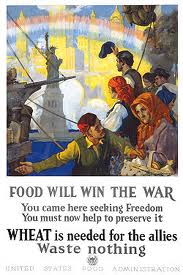 At the start of the war ration books were issued and by March 1940 bacon, sugar, butter and meat were being rationed. By the following July jam, cheese, canned foods and other groceries were added to the list of food that was restricted.
Tis meant housewives had to be ingenious if they wanted to provide nutritious and appetizing food to their families. It was easier in the rural areas as families could grow their own vegetables and keep a few chickens. Often there was a ‘pig club’ where several families fattened a pig on their leftover food scraps and then shared it between them when it was slaughtered. Unfortunately the War Ag took half the meat so the families had only one side to share.
The War Ag’s effort to keep the nation healthy paid off and by the end of the war people’s health had improved despite the severe shortages. Farmers produced more food than at any time – before or since – and were able to prevent the population form being starved into submission.
Potatoes weren’t rationed so they became a staple part of the wartime diet. Here is the weekly allowance. 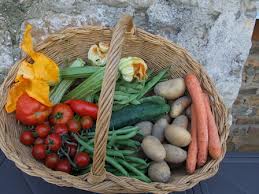 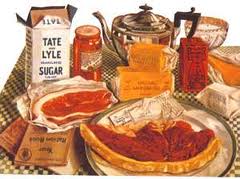 Woolton Pie was popular. It was invented by the head chef at the Savoy and named after the Minister of Agriculture. It consisted of vegetables cooked in pan until soft and then put in a pie dish and covered with potato pastry. Yum1 Yum!
There was a recipe for ‘mock goose’ which involved pork stuffing and other vegetables shaped a goose and parsnips stuck on the side for legs. Spam fritters were another favourite as was stuffed marrow and stuffed cabbage.
Amazingly many products around today were also available in the war. HP sauce, Bisto, Birds Custard, Marmite, Smiths Crisps, McDougall’s Flour, Nescafe, Bournville Cocoa, Ovaltine, Weetabix, Kellog’s cereals and Quaker Oats  to name but a few.
Sweets were rationed but some things were still sold –but hard to find unless you could afford to buy on the black market. Cadbury’s chocolate, Terry’s chocolate, Mars, Crunchie, Quality Street, Cadbury’s Milk Tray, Rowntree’s Smarties, Kit-Kat, and Rolo were all around and many with the same wrapper as today. There were also ration bars of Cadbury’s chocolate for 2 1/2d.

There was a wartime food experiment done a few years ago where a morbidly obese woman ate only war recipes – the before and after pictures are amazing. She is now an attractive , slim, young woman. There was less fat and sugar in the diet and this was obviously healthier.
Spam fritters and Mock goose just don’t do it for me.

Wow - that is a tough ration. Thanks so much for sharing. I found the post very interesting.
Steph