Far After Gold by Jen Black is up on Amazon Kindle at a very low price!
Amazon 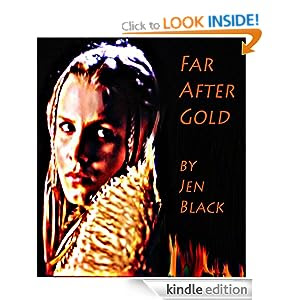 The paperback has been lying forgotten on my shelves for a couple of years since Quaestor ceased trading in 2010 due to the owner's ill-health. The book had just over a year of life as a viable paperback, and I suddenly thought - why waste all that effort? why not put it up on Amazon Kindle?

Checking my pc, I didn't have a file for it. None of my USB sticks held a copy. The thought of re-typing it all from the paperback, or scanning it, was not encouraging. Finally I found a copy on an old hard disc, which reminded me How Things Have Changed in a few years!

So I began with an old computer version. I put it into text to take out all the Quaestor formatting, and then began the laborious task of putting all the punctuation back in again. It takes time. As I inserted paragraphs and suchlike, I began tweaking the words themselves; a word here, a deletion there, but soon, I was taking out and rewriting whole chunks. All I can say is I wrote FAG, as I call it, about six or seven years ago, and I've learned a lot since then.

So, it's now a smart, sexy, romantic tale of a young Christian girl bought as a slave by a young Viking warrior.

Here's an excerpt:
“Come with me.”


Emer stood rooted to the deck. Flane reached the gangplank, turned and beckoned.


Emer scowled and did not move.


Flane clicked his fingers. Astounded, Emer lifted her chin, turned her head and stared pointedly out to sea. From the corner of her eye she saw one sailor nudge another and both stopped what they were doing to watch what would happen next. Memories of the overseer and his cane flashed through her mind, and she decided moving might be her wisest choice even though he treated her like his favourite hound. Pride stiffened her spine as she halted before him.


“My name is Flane.” He tapped his chest and repeated the words, as if she were stupid, and then sighed. “Trust me to pick a girl who doesn’t understand the language.” He drew his dagger, and the fierce blade flashed silver in the sunlight.


Emer’s heart leapt into her throat. Would he kill her because she could not speak his language? What other reason could he have? Should she speak now, before it was too late? She met his blue glance for an instant even as she took a swift step back, ready to run, heedlessly, in any direction.


He caught her wrist and dragged her in close.


Her heart thudded wildly at the sudden contact of chest, hip and thigh. Mesmerised by his steady blue gaze, she stood there in the thin sunlight with the sound of water lapping against the ship and the smell of seawater and seaweed in her nostrils. She drew a swift, choked breath of air. Her last moment in the world had arrived, and she could not free her tongue to speak. Dear God…. She shut her eyes, awaiting the bite of cold steel at her throat. Dear Lord, accept my soul this day…


He hooked one finger under her leather slave collar. Surprised, she opened her eyes and flinched at the sight of the steel blade flashing wickedly in the sunlight.


“Steady, steady,” he murmured, as if to a nervous animal. “I thought you’d rather be free of this.” He gave a couple of gentle tugs on the leather collar at her neck, and before she grasped his intention, the steel sliced through the hated thing. She never even felt the coldness of the blade.


He dangled the strip of leather with its attendant piece of rope in front of her. “Do you want to keep it?”


Furious at being frightened and then gentled like a nervous horse, Emer seized the hated collar and hurled it far out over the loch.

Thanks, ladies. It all helps!