The Scarlet Pimpernel inspired me to write a Georgian adventure romance with my own mystery man, Christian Hartley.
Maggi

"They seek him here,
they seek him there,
those Frenchies seek him everywhere.
Is he in heaven or is he in hell?
That damned elusive Pimpernel."
After Baroness Emmuska Orczy wrote The Scarlet Pimpernel, it was a successful play having over 2,000 performances in London. It then became a highly successful novel throughout the world. The popularity of the novel encouraged the baroness to write a number of sequels for her "reckless daredevil" over the next 35 years. The play was performed to great acclaim in France, Italy, Germany and Spain, while the novel was translated into 16 languages. Subsequently, the story has been adapted for television, film, a musical and other media.
The Scarlet Pimpernel is an adventure novel set during the Reign of Terror following the start of the French Revolution.
The international success of The Scarlet Pimpernel allowed Orczy and her husband to live out their lives in luxury. Orczy wrote in her autobiography, Links in the Chain of Life: “I have so often been asked the question: ‘But how did you come to think of The Scarlet Pimpernel?’ And my answer has always been: It was God's will that I should.  And to you moderns, who perhaps do not believe as I do, I will say, in the chain of my life, there were so many links, all of which tended towards bringing me to the fulfillment of my destiny."
Perhaps many writers can relate to that.


“He that hath wife and children hath given hostages to fortune.”

Leave a comment and win a copy of the e-book. 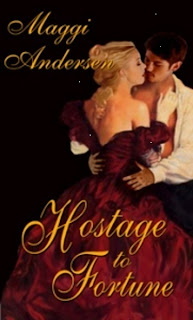 Viscount Beaumont has buried himself in the country since his wife died. As the French Revolution rages, French actress Verity Garnier is ordered to England to seduce him back to France. She despises men, but she must not fail.

Here is a taste:

Dancers gathered for the Roger de Coverley, and Henrietta had time to study Mr. Hartley at closer quarters as they advanced and retreated, performing the intricate steps. When they held hands for a brief moment, his gaze found hers. “Why, your eyes are green, Miss Buckleigh.”
Henrietta flushed, forgetting she’d been covertly noting the blue-grey color of his. “As you see, Mr. Hartley.”
“I am delighted,” he continued, when they next came together, “for I thought them blue.”
Henrietta twirled away.
When they met again, he said, “And blue is a most common found in England, don’t you think?”
“Yours are blue, Mr. Hartley.” Henrietta didn’t feel inclined to admit they were more grey than blue, not like the sky, but shadows over a deep lake. For some reason, she wanted to get the upper hand with this man.
He grinned. “So you noticed.”
“One could hardly fail to. This dance is so long-winded.” Unable to sustain a fiery gaze when his was so pleasantly warm, she fixed on his satin waistcoat, admiring the silver buttons.
“Your hair is as fair as a Greek goddess,” he said when the next opportunity arose. “I like the way you wear it, with the ribbon.”
“Yours is as black as a devil’s,” she responded.
A man dancing next to them coughed.
Mr. Hartley chuckled. “I prefer yours flowing free. As you wore it when I first spied you on your balcony. Like Juliet in Shakespeare’s play, I felt tempted to play Romeo and climb up to you.”
“A good thing you didn’t, Mr. Hartley, for I would have thrown a pitcher of water over you.”
The neighboring man’s cough turned into a guffaw which made his partner frown and inquire what ailed him.
The dance ended, and they left the floor. “Why someone has trod on your shoe, Miss Buckleigh. I do hope it wasn’t I.” He bent at her feet to dust her shoe with his handkerchief. Her cheeks grew hot as she stared down at his dark head. Her fingers itched to touch his unpowdered black locks, and she hurriedly looked away.
“Oh, I don’t doubt that it was you, Mr. Hartley,” she said to control her disturbing urges. “But please don’t concern yourself.”
“Then I apologize profusely.” Mr. Hartley returned his handkerchief to his pocket, his eyes brimming with laughter. “It’s been a pleasure, Miss Buckleigh.”
Henrietta swept him a deep curtsy. “And mine, Mr. Hartley.”
“I trust we will meet again.” He offered her his arm and escorted her back to where her aunt sat among the dowagers.
“London is a big town. I doubt that’s likely.” Henrietta’s heart fluttered with the hope of meeting him again, but she dismissed the thought as quickly as it arose.
“Oh, we will, for the ton tends to flock together, in ballrooms or on horseback.”
Henrietta watched him walk away. She didn’t know his first name. What would it be? His handkerchief bore the monogram ‘C. H.’. Cornelius? Christopher? Charles? Cuthbert? She giggled. She dared not ask her aunt, for that lady was far too observant.
Hours later, everyone prepared to leave, retrieving coats, cloaks, reticules and shawls.
Her father placed her cape around her shoulders. “Did you enjoy your first dance, Hetta?”
“It was lovely, especially the play.” She turned to look at him. “Did you enjoy the evening?” Ordinarily his thoughts would be on his cattle, and he would have suffered through this for her, but now she doubted it. He looked far too delighted to be here.
“I found it most entertaining,” he said, as a smile lit his eyes.
“You looked as though you really did enjoy it, Anthony.” Aunt Gabrielle had come to join them.
“Father has planned to stay a little longer in London, Aunt.”
“I must say I’m gratified,” she said, with a twinkle in her eye. “I wonder what attraction has made you so enamored of London society, when it never tempted you before.”
“Yes, Father, do tell.”
He laughed and guided them towards the door. “One might ask you, Hetta, how much you enjoyed that last dance with Christian Hartley.”
Henrietta’s cheeks grew warm. So his name was Christian. She repeated it under her breath.
Author Website:
Posted by Maggi Andersen at 12:02 PM

*They seek him here, they seek him there*...Love the Scarlet Pimpernel, Maggi! I also loved The Reluctant Marquess and would love to win Hostage to Fortune. Great post!

Hi Cheryl, delighted to hear you enjoyed The Reluctant Marquess! Thanks for stopping by. Good luck!

Glad you enjoyed it, thanks Deborah.

I love this time in history and the A&E 'Scarlet Pimpernell' was my first introduction to the story. I was enjoying your book excerpt- witty bantering.
I am glad for the opportunity for the giveaway. Thanks for the posting!

Hi Sophia, glad you enjoyed the excerpt. Thanks for visiting.