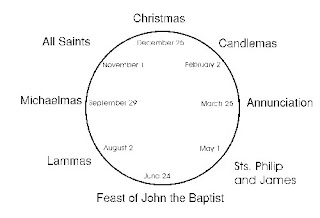 Thank you all,
Linda
Posted by Linda Banche at 8:40 PM

Thanks for the informative post Linda. I've heard these terms in books etc, but haven't always understood them. I'm looking forward to your post on cross-quarter days.

Thanks, jtwebster. I find this information interesting. I never knew what they were, either, that's why I looked them up.

This is so useful, thanks Linda.

An important reminder of the value of traditional festivals in the days before the standardisation brought by clocks, calendars and diaries in every home. Thanks, Linda.

You're welcome, Keena, Maggi and Peter.