ODE TO THE JACOBITES 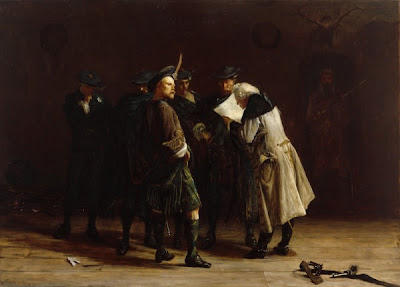 As many authors claim, I am frequently plagued by a very mischievous muse who chooses the most inconvenient of times to summon me - most frequently waking me from sweet slumber or interrupting my shower!
A few months ago she pulled precisely such a prank by waking me at 2Am with the first stanza of a poem.
"A poem?" I asked. "What kind of joke is this? I don't write poetry! I don't even like poetry!" I insisted.
"You do now," she replied with a smirk.
In hindsight, I now realize that this narrative poem, half composed in my sleep, has served as the inspiration for an entire new series that I have named GEORGIANS AND JACOBITES.
Even if you are not a connoisseur of poetry, I hope you will enjoy the historical perspective it provides for the Jacobite rebellions.
ODE TO THE JACOBITES
While Queen Anne lay stiff in bed,
With no successor,
declared as dead,
Parliament sought up and down
A protestant to wear the crown.

But James the third, called pretender
Refused to be to be the faith’s defender,
Three crowns he’d forfeit for a mass,
Ere to Hanover would they pass.

Georg Ludwig in no hurry,
in his duchy long would tarry,
Ere to Britain deign to go.
Knowing not his kingdom’s tongue,
In his greed he would come,
His queer retinue in tow.

With Mustapha and Mahomet,
the Maypole and the Elephant,
George did claim his throne.
His faithless wife locked tight away,
(for twenty years, if a day),
This king would reign alone.

High Tory and the Jacobite
Would n’er accept the country’s plight
Contending yet for Divine right,
The Stuarts to restore.
For others with more Popish leanings,
in their closeted convenings,
Treason was the true meaning,
One could scarce ignore.
And many white cockaded hosts
Raised their glass in furtive toasts,
To James- forevermore.

No longer strife disguising,
Began the ’15 rising,
Though t’would prove a damned devising,
Headed by Lord Mar.
With Stuart standard he proclaimed
Scotland in his sovereign’s name.
South to England now his aim,
Intent on civil war.

With less sense than bluster,
The English north did muster,
Under Thomas Forster,
Wearing the general’s plume.
To Newcastle and Preston,
In a grand procession,
the army marched predestined
With a battle plan sure doomed.

'Pon news to Jemmie of the tidings
Of his Scottish clans uprising,
The unexpected, so surprising
Struck the king with disbelief.
But jubilation took its place
On this exiled sovereign’s face,
And for his Scotland he did race
To his troops’ relief.

Now at last had come his chance
Funded by the King of France,
Akin to some great romance,
Like the Holy Grail.
A most devout mission,
Coronation his ambition,
Ever closer to fruition,
The Chevalier set sail.

But arriving yet again too late,
His rebels conquered by the State,
According to the Stuart fate,
Once more doomed to fail.

Sheriffmuir lost, the rebels thwarted,
The guilty hung, beheaded, transported.
For nigh thirty years - the Cause aborted,
E’er springing back to life.
With Bonnie Charlie, the Young Pretender,
Brave and strong, a worthy contender,
Jacobite passions again engendered,
In the ’45.
- Emery Lee
http://authoremerylee.com
For further reference: http://en.wikipedpi.org/wiki/Jacobitism
Posted by Emery Lee at 3:12 PM

Emery Lee
Combining meticulously researched historical settings and love of a great romantic tale, Emery Lee fictionally explores the Georgian era in a distinctly period voice. In THE HIGHEST STAKES, a tale of thwarted love and horseracing, Ms. Lee transports the reader to a world where racing and breeding were the obsession of the uppermost elite, and a match race might easily replace a duel in settling a point of honor. Upon this high stakes turf of England and Colonial Virginia, a tale of drama, danger, thwarted love, and retribution unfurls… Second in her Georgian era trilogy, Emery Lee spins a web of drama, passion, and deceit, deep in the world of high stakes gaming, when a chance meeting at the hazard table between a seasoned gamester and a courtier of a prince, changes their destinies as unpredictably as a roll of the dice.