Prostitution during the Victorian era. ~ New Release SURRENDER TO DESTINY

The Great Social Evil, as prostitution became known in the mid-19th Century, was brought about by the shift from a moral/religious cause to a socio-economic one. The 1851 consensus revealed the population was approximately 18 million, which amounted to 750,000 women who would remain unmarried because there were too few men. These women were labelled 'redundant and superfluous' and many ended up in prostitution.
While the Magdalene Asylums had been "reforming" prostitutes since the mid-18th century, the years between 1848 and 1870 saw a veritable explosion in the number of institutions working to "reclaim" these "fallen women" from the streets and retrain them for entry into respectable society — usually for work as domestic servants. Many girls were orphans and many came from the country, often tricked into "the life" and unable to return home. Some were as young as eight years old!

Prostitutes were often presented as victims in literature such as Thomas Hood's poem The Bridge of Sighs, Elizabeth Gaskell's novel Mary Barton, and Dicken's novel Oliver Twist. The emphasis on the purity of women found in such works as Coventry Patmore's The Angel in the House led to the portrayal of the prostitute and fallen woman as soiled, corrupted, and in need of cleansing.
This emphasis on female purity was allied to the stress on the homemaking role of women. 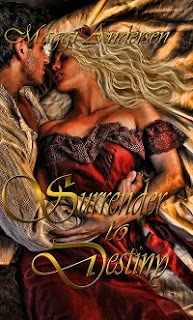 While making a movie about Giovanna Russo’s life in Victorian London, Astrid Leclair and Dylan Shaw steam up the screen with their passionate scenes.
Two men desire the beautiful artist’s model, Giovanna Russo. One intends to make her his mistress and the other wants her dead.
Buy Link: http://www.newconceptspublishing.com/books/SurrenderToDestiny.html

Wikipedia
A Dictionary of Victorian London Lee Jackson
Posted by Maggi Andersen at 10:56 AM

Wow! That cover is so eye-catching!

Thanks Deborah, definitely one of my favorites.