I met Cynthia Neale in the historical fiction group on She Writes. Her debut novel, Norah, about an Irishwoman in 19th century New York is just out.

Cynthia: My publisher, Lucky Press, recommended doing a book trailer. She is very progressive and there are other Lucky Press authors with book trailers that I took a look at. And then I also went on She Writes and looked at book trailers. I felt that if done professionally, a book trailer can be a great marketing tool. I had shivers watching a couple of book trailers and wrote down the titles of the books to buy in the future.

Did you do it yourself, or did someone else do it for you? If the latter, what sort of discussions did you have about its content?

My friend's son, Nathan Sorrentino, is a student at Geneseo College in New York State and he created a video for a course that caught the attention of Google who asked him to do some work for them. They live in Rochester, NY and when I visited there in October, we had dinner and brainstormed what kind of trailer I would like. He would do it for the experience and as a friend and I would give him a "tip." We e-mailed back and forth for a couple of months. I wrote up the text and he gave me links to music downloads with a one-time use fee (minimal). He found some images himself in archival material and I sent him photos of landscapes in Ireland I had taken in 2008. Nathan understood the legal requirements and the technical aspects of making this video, but he also could fathom the heart of what I wanted to relay in the video. He advised doing some tweaks here and there. I edited the text a few times and sent it to my publisher who also did some tweaks on my texts. Nathan is a talented young man and anyone who would like him to do a book trailer, should contact him. His information is on the credits at the end of the trailer.

Where did you source the images for the trailer, and how did you go about finding the music?

The sources are listed in the credits of the trailer. I listened to a lot of the music on various sites. I have a lot of Irish music I listen to and dance to, but I didn't want to go about getting permission, etc. I had even thought of asking some musician friends to play for the video, but time was of the essence. It took quite a few hours for me to pick out just the right music for the video, but I felt quite pleased with deciding on the tunes I found. And the cost was only about $30.00!

What sort of feedback have you had about the trailer and has it raised interest in your book?

Since the trailer went up mid-January, there has been nearly 1500 hits and many positive comments. Comments from some people in other countries, including Ireland. As an American writer, I wanted to be delicate, but strong, about the subject of The Great Hunger. I was not born in Ireland and many of the Irish-born still have a good deal of angst over this event in their history. I found that it was necessary to include the background (my first book material) of An Gorta Mor to make it understood what was at stake for the Irish, and especially Norah McCabe, to have immigrated to a city such as New York. I have had positive feedback from the Irish-born and from everyone who has viewed the trailer. Now...for a screenwriter!
Thank you Cynthia. Very best of luck with "Norah. 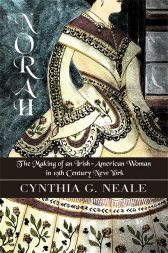 Deborah's Review Norah is a story of a young immigrant woman battling hardship, poverty and prejudice in New York in the 1850's. It has obviously been lovingly researched. The portraits of Norah McCabe and her family are beautifully drawn, and we catch most of the character of Norah from the attitudes of her Mam and Da who want the best for her but are unable to understand just how far she wants to climb. Cynthia Neale is particularly good at getting inside the minds of her characters to understand their motivations, although this is her first novel for adults - previously she has written books for children.

Make no mistake, although at times the language is lyrical, this tells it like it was, grit and all. All the hard facts of life for an Irish immigrant are between these pages; poor housing, the bordellos, street fights, and the cut and thrust of the gang underworld. At a time when to be black made you a second-class citizen, the book raises the question of what forms a person's identity, particularly for a white minority such as the Irish in New York.
Da discusses black equality with Norah:

At times this novel is rather documentary in style, and it is certainly not the usual run-of-the-mill historical, but I can highly recommend it as a slice of real life for anyone with an interest in this period of New York history, particularly those with family or connections to Ireland.

Fancy making your own book trailer? Here's how with the excellent article by Brenda Coulter.

http://www.gather.com/viewArticle.action?articleId=281474977019853
And if you already have a book trailer out, or know of a particularly good one, please let me know!