Pillars of the Earth: Take Two


After my disastrous, first five-minute viewing of Pillars of the Earth, I wasn’t sure if I would attempt a second viewing or not. But I did. I’m drawn to the Middle Ages like a passerby to a “do not touch” sign. 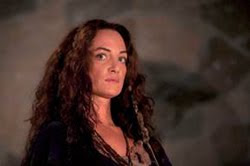 After fast-forwarding through the burning of the White Ship to placate the history geek in me, I settled onto the couch with a bowl of chocolate-covered blueberries. For those of you without the Starz channel, Pillars of the Earth is an original miniseries based on Ken Follett’s novel of the same name. It tells the story of Prior Phillip fighting seemingly insurmountable odds to build a cathedral while England falls into anarchy around him.


I haven’t read Follett’s book, so I have no idea how the Starz mini-series compares to it.


I’ve heard from others that he writes strong women well, and I think that’s apt praise.
Ellen, the mother of Jack, is not only a strong woman, but also one of the most realistic medieval characters I’ve seen in historical fiction. As fearlessly played by Natalie Wörner, Ellen embodied the “flesh” side of the era—as opposed to Prior Phillip who stands in for the “spiritual” side of the era. When she urinates in front of Bishop Waleran to let him know exactly what she thinks of him and his judgments, she came alive to me as a medieval woman.
A modern woman wouldn't do that.


Many people forget, or just don’t know, the role urine played in the medieval era. From medicine to making wall plaster to removing lanolin from fleece, urine was a useful part of daily life. So the insult wouldn’t have had the same ew factor for our medieval bishops as it likely did for viewers.
In my upcoming book, ENTHRALLED, my heroine weaves and she also dyes her own thread. That bit of personal history isn’t relevant to the story, so I didn’t go into the fact that she would’ve used urine not only to clean the wool but also to make the dyes.
During the era (and prior), urine also was used as a bleaching and tanning agent, as part of medical treatment, including this interesting way to diagnose infertility from The Trotula.

“If the woman remains barren by fault of the man or herself, it will be perceived in this manner. Take two pots and in each one place wheat bran and put some of the man’s urine in one of them with the bran, and in the other (put) some urine of the woman … and let the pots sit for nine or ten days. If the infertility is the fault of the woman, you will find many worms in her pot and the bran will stink. (You will find the same) in the other (pot) if it is the man’s fault. And if you find this in neither, then in neither is there any defect and they are able to be aided by the benefit of medicine so they might conceive.”

Even today, some people promote a urine treatment for everything from athletes’ foot to aging facial skin. The idea is interesting but I’ll stick with my creams, thank you.
Posted by Keena Kincaid at 7:11 AM

I picked up a copy of The Pillars of the Earth a few weeks ago. Haven't read it quite yet, but it sounds fascinating. I'm hoping the mini series finds its way down here to New Zealand in the not too distant future. There are not enough historical dramas these days.

Interesting comments about the use of urine. It's popped up a few times in the books I've been reading. And I might add that my grandfather's broad beans thrived on the contents of his chamber pot! I never did like broad beans.

I wouldn't have eaten those broad beans either!

Fascinating - it was one of the worst jobs in the 16th and 17th centuies to go from door to door to collect urine(mostly old and rank)which was used in various industries including as you say,tanning and dyeing. Ken Follett's book is very good indeed. His new one on the English first and second world wars is just out too.

I think I'll put up with the wrinkles, but I wonder if it worked?