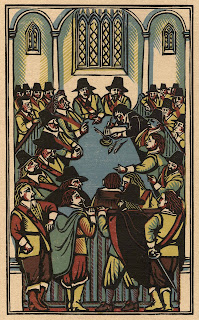 By summer 1647, the Roundheads were winning the English Civil War. Oliver Cromwell's New Model Army had crushed the Cavaliers at Marston Moor and Naseby, and King Charles was in custody at Hampton Court Palace; albeit an easy captivity for he was allowed to see his children, entertain his friends, play bowls and go hunting.

At this time, the New Model Army officers, among whom were Puritans and Levellers, could see an end to their usefulness and the generals, the ‘Grandees’ feared Parliament, who, suspicious of the religious fanaticism of the army, feared they would disband them.

Keen for a final settlement with the King, Parliament also wanted to cut soldiers' pay, disband regiments, refuse indemnity for war damage and pack them off to Ireland. Worse, they looked set to betray the religious and political ideals the New Model Army had spent five years fighting for. The soldiers complained: ‘We were not a mere mercenary army hired to serve any arbitrary power of a state, but called forth ... to the defence of the people's just right and liberties.’

The ‘Grandees’ responded by inviting the Leveller Agitators to debate their proposals before the General Council of the Army at a gathering that took place between the 28th October and 9th November. With Oliver Cromwell in the chair, the New Model Army came together at St Mary the Virgin Church at Putney, in October 1647, to argue the case for a transparent, democratic state free from parliamentary or courtly corruption.

- Should they continue to negotiate a settlement with the defeated King Charles I?
- Should there even be a King or a House of Lords?
- Should suffrage (a civil right to vote, known as the franchise) be limited to property-holders?
- Would democratic changes lead to anarchy?
- Would religious toleration be granted to Puritans, Quakers, Anglicans and Presbyterians?
- As King Charles made no effort to negotiate and had brought ‘foreigners’ [Scots] into the country to fight his people – what should be done with him?

Levellers
The Grandees submitted, ‘The heads of the proposals’ – a conservative document that did little to challenge the existing power structures, in effect offering to hand the crown back to King Charles with few concessions.

The Levellers offered their own manifesto entitled the ‘Agreement of the People’, which set out a constitutional settlement urging religious toleration, a general amnesty, an end to conscription, a system of laws that applied equally to everyone with no discrimination on grounds of tenure, estate, charter, degree, birth or place. They also demanded regular, two-yearly parliaments and an equal distribution of MPs' seats by number of inhabitants.

They believed in human liberty and a conviction that politicians were as dangerous as princes when it came to undermining personal freedom, and that all those who placed themselves under government should have the right to elect it.

The wealthy, socially conservative Grandees were horrified, assuming this would mean anarchy and corruption with wealthy politicians buying up the votes of the uneducated, dependent masses.

Instead, Cromwell's son-in-law, Henry Ireton, proposed that the franchise be limited to those with a ‘fixed local interest’, that is, the independent property owners.

Colonel Rainsborough declared this a betrayal of the civil war sacrifice, and finally a compromise was reached that the vote should be granted to all adult males - excluding servants, apprentices, foreigners, beggars and, of course, women.

As for the King, the mood had by this time hardened against that ‘man of blood’ and general opinion turned to putting him on trial for high treason.

The issues of the Putney Debates - liberty of conscience; a government dependent upon the sovereign will of the people; equality before the law - would, via the ministrations of John Locke, make their way into the American constitution. In Britain, these philosophies remained buried late into the 19th century mainly thanks to ASP Woodhouse's 1938 work, Puritanism and Liberty, which implicitly conjoined the struggle against fascism with Rainsborough's cry of liberty.

What the Levellers proposed nearly 400 years ago was precisely the kind of secular constitution that guaranteed freedom of conscience and speech alongside a sovereign parliament. 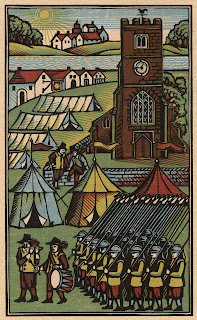 Why Putney?
Putney in 1647 was a small Thames-side town of about 900 people, strung out along the High Street and the river bank, with London six miles away and easily accessible by horse, coach or boat.

The inhabitants of the town no doubt bitterly resented having soldiers billetted upon them without being paid compensation. There were plenty of attractive billets for officers both in Putney and Fulham, Lord Thomas Fairfax stayed at William Wymondsold’s, the largest house in Putney. Cromwell lodged at Mr Bonhunt’s, [possibly Thomas Bownest], and Henry Ireton, stayed at Henry Campion’s near the corner of the High Street and Putney Bridge Road.

The New Model Army’s headquarters were at Putney, so officers and soldiers must have been a familiar sight on the streets. Thomas Rainsborough was able to stay at his brother’s house in Fulham, while the agitators lodged at Hammersmith, and presumably passed to and fro on the Fulham ferry, but they met at least once at Hugh Hubbert’s house, close to Putney church.

Inscribed inside St Mary’s Church, are the immortal words from the Debates of Colonel Rainsborough, the highest ranking officer to support the ordinary solders:

'I think that the poorest he that is in England hath a life to live, as the greatest he’
Posted by Anita Davison at 5:19 AM

Email ThisBlogThis!Share to TwitterShare to FacebookShare to Pinterest
Labels: The Putney Debates