Bought as a bed slave from the slave market

Blurb: Bought as a bed slave from the slave market in Dublin, Emer hasn't a clue what to expect from her new master. She doesn't know if she will survive the night, but she isn't about to give in with a struggle....


Emer looked round. All he said was true. Thick, square pillars of golden wood rose up to meet the rafters, and the roof sloped down to meet the walls at the height of a tall man. Unbleached linen hid the lower portion of walls free of sleeping platforms, and someone’s clever needle had sketched mythical animals around it in coloured wool.


Flane sat on the bed, grasped her shoulders and pulled her back to lie on the mattress beside him. He laughed into her wide, shocked eyes. His lips dived to the skin beneath her jaw and nuzzled towards the neckline split in her chemise while his fingers untied the knot that held the strings closed. He parted the fabric and his mouth slid down towards the newly revealed curve of her breast. His bristles rasped against her skin and Emer fended him off with both hands.


He braced one hand to either side of her shoulders and loomed over her. “What’s wrong?”


Emer gulped. “It isn’t right,” she muttered, unable to meet his steady gaze. She looked across the hall, where children ran about, getting in the way of their elders, and a dog barked as it leapt crazily about his newly returned master. The rest of the world seemed to be going on as normal, and here she was fighting for her virtue. No one cared.


No one had even noticed.


Flane chuckled, and she faced him suspiciously. “I can’t think of anything better,” he said. “What’s not right?”


At his tone, some of her anxiety dispersed. She focussed on his leather jerkin and a part of her brain registered that someone had dressed the leather very well indeed, and threaded small tassels through the shoulder seam. She admired the pale shade, which so nearly matched his hair.


He taunted her now. Emer saw the mischief in his eyes, and caution vanished. “I cannot be happy in a place where we are on public view.” She opened her eyes wide and words, unheeded, shot out of her mouth. “And we should be married before you bed me!” Her breath came and went as if she’d been running and warm blood rushed beneath the skin of her throat and face.


“Really?” His voice betrayed nothing, but his silver brows drew down in a frown. “And how would marriage change anything?” 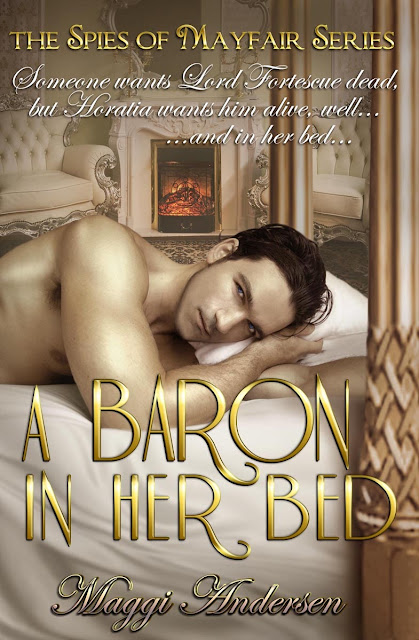 He caught sight of her and rode towards the stables then dismounted and led the horse inside. “Sorry, my lord,” Horatia said, adopting Simon’s gruff voice. “We have no footman here. No under-groom neither. I’ll stable your horse.”

Read more »
Posted by Maggi Andersen at 12:00 AM No comments: Links to this post The city of in , south west is a world heritage site, famous for its Roman baths and its Regency architecture. I drew on the Roman city of and its baths for my historical romance Flavia’s Secret. There is also a hidden city at , the medieval city, parts of which remain even after much has been built over, adapted, added to or superseded by the Regency makeover the city underwent in the eighteenth century.
We can see the medieval city in John Speed’s 1610 map of . It’s small and walled, with towers and gates. The thermal baths are there, and there are orchards, churches and hospitals. The Abbey is also shown, smaller than in the early Middle Ages when it was extensively added to by Bishop John, who wished to make Bath the seat of his bishopric. This Abbey church was wrecked by fire in 1137 and the whole monastery complex declined, especially after the Black Death in 1439. Later, the rebuilt church occupied only the nave-space of the former Norman cathedral. Other medieval buildings of , such as St Catherine’s hospital on , the of Stalls and Alsi’s bath have long disappeared, their foundations hidden beneath the later expansion of the city. However aspects of medieval do survive. A section of city walls still stands in Upper Borough and is now protected. Part of one of the ancient gates, the East Gate, remains, close to Robert Adam’s . Many of the Georgian-fronted buildings turn out to have hidden medieval timber frames and structures behind the palladian facades, such as was discovered behind the front of . There are medieval cellars, too, such as one in Abbey Church House. The ancient healing place of the the Baptist, ‘the hospital of the baths’ still partly fulfils its original medieval function.
I have recreated the medieval city and its baths in my forthcoming historical mystery, An Older Evil, the first of a series featuring Alyson, a widow of . 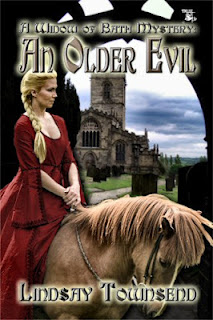