George II and Caroline of Ansbach - A Love Match 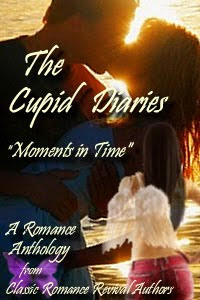 By: Stephanie Burkhart
My story in the Cupid Diaries is one that is close to my heart – that of George II and Caroline of Ansbach. It's one of the first historical romances I've ever read and it really inspired the love I have for historical fiction.

I discovered this interesting couple back in 1988 when someone sent me a book called "Queen in Waiting" by Jean Plaidy in a care package. While I was waiting to take the Duty Train to Berlin, I sat down at a German Café and decided to give the story a try.

Jean Plaidy is a pen name for Victoria Holt and Victoria Holt was one of my favorite Romantic Gothic authors. I had no idea she did historical fiction, but she totally enthralled me with George and Caroline's story.

George's father was George I of England, but before he ascended to the kingship, he was Elector of Hanover and his marriage was arranged. He couldn't stand his bride, Sophia Dorethra of Celle. He did his duty by her, had two children, then ignored her. She said what was good for the goose was good for the gander and CHEATED ON HIM. Well, George would not be cuckolded. He sent a young and vivacious woman to the tower. She grew old and died in that tower. George II was only a boy when it happened, but it left a mark on him.

When it came time for his son to marry, George I wanted George II to be in love with his wife. Surprising considering the times, but not so surprising considering what he went through in his marriage. His mother, The Dowager Electress Sophia suggested Caroline of Ansbach.

Caroline grew up in the small Baravian town of Ansbach. She was orphaned by ten and went to live with her mother's friend, Sophia Charlotte, the Electress of Prussia. Sophia Charlotte was the Dowager Electress's daughter. Caroline loved living with Sophia Charlotte. She grew up in a sophisticated court and one of her best friends was a philosopher, Liebnez.

Sophia Charlotte was on her way to Hanover to arrange the marriage of Caroline and George II when she died. George and Caroline seemed destined to never met.

The Dowager Electress whispered into her son's ear. Why not have George II marry Caroline? George I liked the idea, but wanted his son to be in love with his wife. He sent George II to Ansbach in disguise to meet Caroline and to see if a love match could be made. After all, his son had faults. He was short, short tempered, and a nag. Caroline was reputed to be beautiful, mild mannered, and quick-witted.

George was honored to be courting Caroline – even in secret. After all, she had refused the heir to the Spanish throne. If she was good enough for a king, well, she was a prize to have indeed. When he met her, the sparks flew on both sides and he realized it was more than pride – it was love. 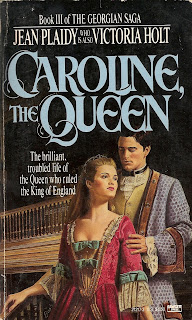 They went on to marry and had 9 children. George I was offered the British throne and he accepted. George and Caroline became the Prince and Princess of Wales. Caroline was the FIRST Princess of Wales since Katherine of Aragon back in 1501.

Eventually, George II took mistresses. Initially Caroline was distressed. Wasn't she enough for him? They were a love match. Then she learned he only did it because he thought it was expected him to have a mistress. With that mind, she picked the mistresses out for him. Still, George loved her until the day she died. On her deathbed Caroline told him to marry again. He said he wouldn't. And he didn't.

Again, it was a story I admired because in a time when arranged marriages were the norm, George and Caroline were in love and then got married.

I hope you enjoy "Royal Pretender" in The Cupid Diaries.

I didn't know this, Steph. Thanks for the post.

I loved their story, Keena. It was the first hitorical fiction I read by Jean Plaidy, aka Victoria Holt and I was hooked.

This is interesting, Steph, thanks. I'm a huge fan of Victoria Holt. I've recently began reading her books again.

I had never heard this story. Fascinating!

Jean Plaidy was marvellous, I learned so much from reading her books. I had not read this one,Steph as this is a period of history that never interested me, but you make it sound as if I should change my mind!

I have all Plaidy's books from when I bought them as a young woman and still re-read them from time to time. She wrote 5,000 words a day and had several pseudonyms including Philippa Carr and Victoria Holt. Her real name was Eleanor Hibbort, nee Burford. Fascinating post.