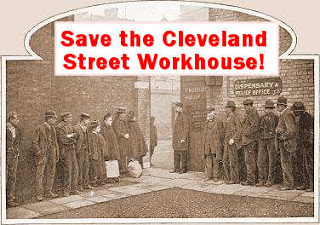 In January I was made aware of a historical workhouse - the former Strand workhouse on Cleveland Street in England - being in danger of demolition. I signed the petition to help stop that from happening.
Today I received further news on the project.

Dear Friend,
I am writing to you because you were good enough to sign the e-petition in support of the Cleveland Street workhouse.
We have two bits of news for you, and an urgent request.
The first bit of news is that one of our supporters (yours truly) has discovered that Charles Dickens lived only 9 doors away from the workhouse!! His address was in a street called Norfolk Street, which is now the southerly part of Cleveland Street, and is now included in its numbering. None of the biographers seems to have noticed this - they knew the address, but did not notice the workhouse. Remarkably, the house still stands, on the corner with Tottenham Street. The fact that there was a workhouse so close to his home (he lived there twice before he wrote Oliver Twist, and for over four years in all) of course means that your support for the workhouse was not for just any old workhouse, but for the very one which may have been the inspiration for the most famous workhouse in the world!!

The Dickens Fellowship is supporting our efforts to get a blue plaque on the house.

The second bit of news is that we have made an appeal with new evidence to the government Minister, which thankfully has been greeted with a request to English Heritage to re-consider its earlier report. The earlier report recommended listing for preservation, and we are hoping the reconsideration will too - especially as the new evidence includes the Dickens connection. English Heritage is about to submit its report any day, and the Minister will then consider it. Of course we are hoping for the best.

The request is that we would very much appreciate it if you could get one other person (or more if you can!) to sign the petition as soon as possible ie: within 24 hours of receiving this!!! We have nearly 2000 signatures and want to get as many as we possibly can before we submit it to the minister later this week.

If you want to keep up to date with our news, look at http://www.workhouses.org/ - the petition is there too!

Thank-you SO MUCH for your support.
Warmest wishes,
Dr Ruth Richardson, historian
On behalf of the Cleveland Street Workhouse group.

So please go and sign the petition and help save an historic building. Once these places are gone they can never be brought back. We mustn't let that happen!
http://www.gopetition.com/petition/39594/sign.html#se

Thank you!
Posted by AnneMarie Brear at 12:21 PM